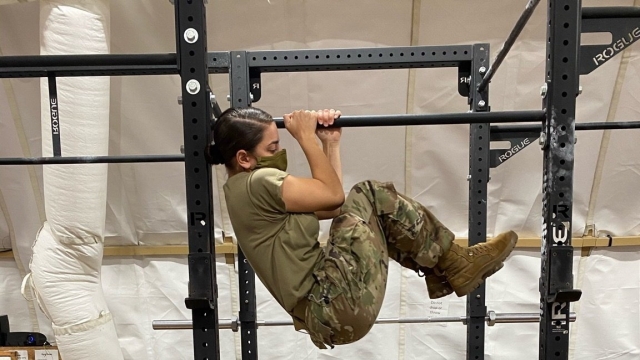 The new Army combat fitness test has been in the making for years. And the Army is pushing forward with implementing this first-of-its-kind gender- and age-neutral test despite a pandemic and congressional concerns that women may not be able to complete it.

“We're collecting data this year ... about training for the ACFT. It is a cultural shift in the way we train and what we expect our soldiers to do, regardless of gender. And as we look at doing functional fitness and strength training, it's just going to take time for our Army to adjust to this new physical fitness requirement,” Maj. Gen. Lonnie Hibbard said.

In a letter addressed to House and Senate Armed Services Committee leaders, Sens. Kirsten Gillibrand and Richard Blumenthal say: “Significant concerns have been raised regarding the data used to develop the test, initial test scores, and logistical issues. The ACFT will determine the career path and success of all soldiers currently serving, yet many information gaps and unknowns remain.”

Gillibrand and Blumenthal point to “an overall failure rate of 84% for females and 30% for males,” information leaked from data collected during field testing in 2019. They say the Army denied that those stats are accurate -- and began releasing less information after being confronted about the data. “But what they have released depicts a consistent 65% failure rate for females and 10% failure rate for males in the moderate physical demand category (the lowest army standard).”

The previous fitness test consisted of pushups, situps and a 2-mile run, with different standards based on gender and age.

The new test requires soldiers to complete a leg tuck, throw a 10-pound ball backward over their head, carry kettlebells, drag sleds across a field, do hand-release pushups and run 2 miles.

These exercises are designed to gauge a soldier’s muscular strength and endurance, power, speed, agility, aerobic endurance, balance, flexibility, coordination and reaction time -- factors the military says are important for a soldier dodging enemy fire or dragging the wounded to safety.

“We have the responsibility for every soldier on the active CONUS. I did take two ACFTs this year to continue to train for and take two, but there's no requirement for them to actually pass, and so the goal is to strive to to pass the ACFT,” Hibbard said.

Around 2,000 soldiers have already taken the test, according to Army officials, who also point out they have received a lot of positive feedback, even though some soldiers disagree with replacing the original test.

“The overarching thing is we continue to train and learn in a COVID environment is to just get soldiers training for and taking it. And then as we continue to flesh out the side effects or byproduct of a soldier was positive for COVID, we'll adjust our policies as we learn more,” Hibbard said.

Newsy asked Army officials about concerns that women may struggle with the new standards. We are waiting for a response. But the Defense Department has stated no action will be taken if a soldier fails and that results of that test will not be used during data collection periods.