Is Siding With President Bush A Good Idea For GOP Candidates? 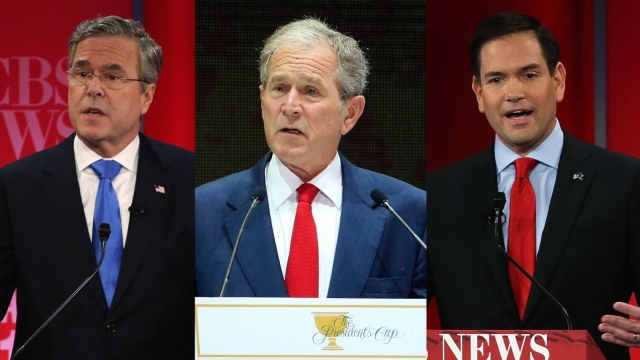 In a Republican primary: yes.

"I just want to say, at least on behalf of me and my family I thank God all the time that it was George Bush in The White House on 9/11 and not Al Gore," Sen. Marco Rubio said in the CBS Republican primary presidential debate.

Donald Trump and Jeb Bush have tussled over the latter's brother constantly in debates.

"I am sick and tired of him going after my family ... while Donald Trump was building a reality TV show, my brother was building a security apparatus to keep us safe," Bush said.

"The World Trade Center came down during your brother's reign. Remember that," Trump said.

But Rubio hasn't been so outspoken in support of the former president. So it begs the question: are Rubio and Bush making smart political moves?

In a Republican primary: yes. Bush was consistently popular with Republicans during his presidency.

And that still holds up. He received a 67 percent favorability rating from Republicans in an October poll.

And he's very popular in South Carolina, where the next primary votes will be cast.

This video includes images from Getty Images and clips from C-SPAN, Marco Rubio for President and CBS.