Is Rugby Having The Same Headaches As NFL With Concussions? 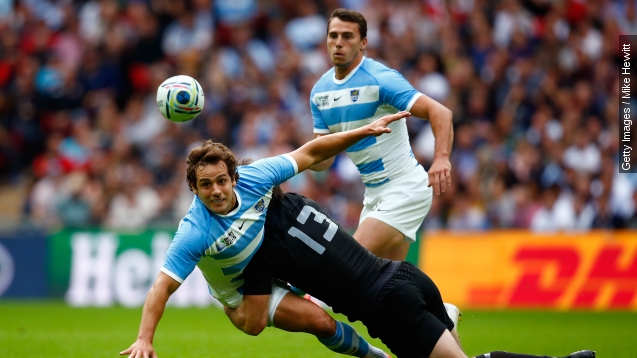 SMS
Is Rugby Having The Same Headaches As NFL With Concussions?
By Ryan Biek
By Ryan Biek
September 22, 2015
Like football, rugby also faces the challenge of how to protect its players from concussions.
SHOW TRANSCRIPT

While NFL fans know good and well about the league's issues with player concussions, they might not be aware of similar issues in another football-esque sport — rugby.

The two sports are obviously not perfect mirrors of each other. In rugby, players run around with no padding, and they play with a slightly larger ball. (Video via DHL)

Still, the concept of both is the same: Get the ball across the goal line before a herd of big guys tackles you. Both sports are also in the midst of figuring out how concussions affect their players.

In the NFL, concussions were down by 25 percent last year. That data, though, was provided by a league that's previously been heavily criticized for withholding information about the long-term effects of concussions.

The NFL and NCAA have implemented changes to help curb the problem, including new protocols and state-of-the-art protective gear. Ironically, though, football's padding may be hurting players as much as it's protecting them. (Video via Ohio State University)

"This time, the added protection of the pads and helmet allow Smith to launch himself 3 miles an hour faster than on his rugby hit," John Brenkus of ESPN says.

But because rugby players play both offense and defense, ESPN scientists say rugby players are involved in an average of 10 more collisions per game than NFL players — which translates to twice as much cumulative impact force. (Video via ARU TV)

Criticism of the NFL has been so pervasive, it's become a part of pop culture. (Video via Columbia Pictures / "Concussion")

Despite the serious criticism the NFL has gotten, though, the league already put rugby's most recent measures in place within the last two years.

A more international scope reveals rugby's been criticized as much as football for being behind the times in concussion protocols.

The issue was made abundantly clear in February when Welsh rugby player George North was knocked out and later allowed to play again, only to be knocked out once more.

Rugby is one of the fastest growing youth sports in the U.S., so now is the time to figure out how to make the sport as safe as possible.