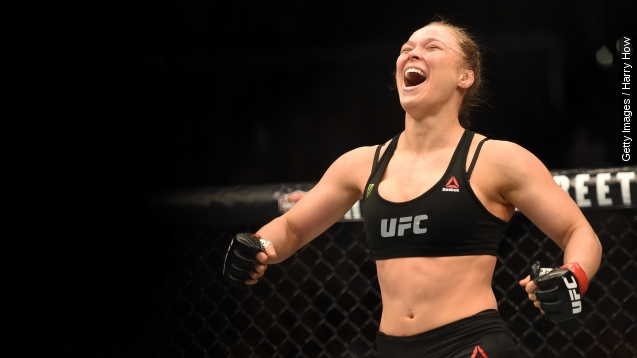 By Matt Moreno
August 9, 2015
The two are reportedly discussing a Dec. 5 UFC fight in Arlington, Texas, though Justino will need to slim down to 135 pounds before that can happen.
SHOW TRANSCRIPT

We may soon be getting the Ronda Rousey versus Cris 'Cyborg' Justino fight we've been waiting for.

An ESPN report, citing Justino's manager, says the two sides have had detailed discussions about a Dec. 5 fight at Cowboys Stadium in Arlington, Texas. Justino has reportedly agreed to fight Rousey at 135 pounds.

"Anything Ronda say or everybody asking me, I don't care," Justino told reporters before her most recent fight against Faith Van Duin.

This fight has been brewing for months now, with the two already sparring in the media and on Twitter — mostly over Justino's failed 2011 drug test.

Rumors of the fight happening were fueled Friday when MMA fighter Tito Ortiz told AXS TV that Justino had already agreed to the venue.

"It will be the biggest pay-per-view of all time, and Ronda will have her hand not raised," Ortiz said.

UFC President Dana White shut that down a day later, though, even though White's denial appears to be temporary.

Ortiz has a point though. This could be one of Rousey's most challenging fights yet.

Rousey, the undefeated UFC bantamweight champion, is coming off a quick win over Bethe Correia. Only three of Rousey's 12 opponents have made it longer than a minute in the ring, with just one surviving past the first round.

At 14-1, Justino hasn't lost since 2005, which is a huge feat in any sport — let alone MMA fighting. She's a punches in bunches type of fighter, which will certainly clash with Rousey's preferred submission wins.

And Justino's sheer size could pose a problem. At 5 feet, 8 inches, 145 pounds, a Yahoo writer says the Invicta FC featherweight titleholder "is a massive woman who has enormous punching power. That is what makes the fight with Rousey so appealing: Justino's power makes her at least a threat to knock out Rousey."

If the fight doesn't happen in December, Justino's publicly offered up April as potential fight month, too, so both fighters can prove they're clean.