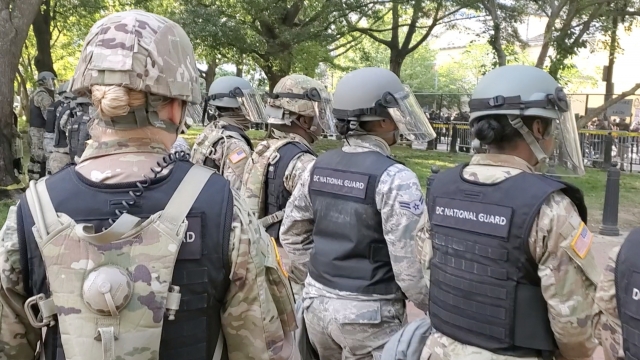 SMS
Is The National Guard Caught Between A Rock And A Hard Place?
By Terace Garnier
By Terace Garnier
June 5, 2020
D.C. residents say they are fearful of the very military men and women sent to protect them.
SHOW TRANSCRIPT

Americans are seeing real-time images from Washington, D.C., of what some are describing as a war zone in the capital.

"It's kind of an eerie feeling," Melvin Stackhouse, a protester in D.C., said.

National Guardsmen from D.C. and multiple states were ordered by the president to patrol public monuments and national treasures, against the wishes of the mayor, who did not invite outside units into the district.

"Why should it be rifles? Why should there be, you know, bulletproof shields and vests? It really creates an adversarial atmosphere that I think is absolutely unwarranted," Yinka Onayemi, a D.C. protester, said.

While these protesters say they know the military is just following orders, they feel the president is using troops to step on their First Amendment rights.

"It's like they dress for war. ... And I don't think that that sends the right message to peaceful protesters," Stackhouse said.

And for those in the military — it's putting them in the crosshairs of the very people they are trying to protect and their commander-in-chief.

"Today we're just basically having a show of presence here. So we're trying to just stop anything kind of before it happens. Basically, we're just trying to deter people from any erratic behavior basically," Staff Sgt. Nathan Allen Hyer said.

Hyer says he's honored to protect demonstrators, adding they have been peaceful so far.

"Overall, most people come up and they say, like, how are you doing? Thank you for what you're doing. We appreciate you, and all that," Hyer said.

But as President Trump continues to threaten to use active-duty military against protesters, some are concerned it's adding fuel to a fire he should be extinguishing.

"And as somebody who grew up in D.C., was born and raised here at Columbia Women's Hospital, was raised by a set of parents who grew up and protested in the civil rights era, who is afraid — I'm afraid for my friends. And it breaks my heart to see the pain that they're going through right now," Clay Underwood, a D.C. protester, said.

So as barricades go up around the White House creating somewhat of a walled fortress, and more and more law enforcement patrol the streets, peaceful protesters continue to march — or stand up for what Black people have been fighting for — for decades.

"I guess I picked this spot because many times now, that dream has been reiterated. It's obviously emphasized by Lincoln himself, but I came back to restate those ideals and we're here now, trying to restate them again," Onayemi said.

When I asked this demonstrator if non-minorities will ever truly understand what white privilege is and what it is like to be fearful of police as a Black person in the U.S., this is what  Onayemi had to say:

"I mean, you can empathize, but I think it's really almost impossible to, like, fully feel it. I don't think they'll ever feel it, you know, unless something drastic would have happened right where they were put in that position. But I don't think it's possible. I think the only thing that can be done is education."