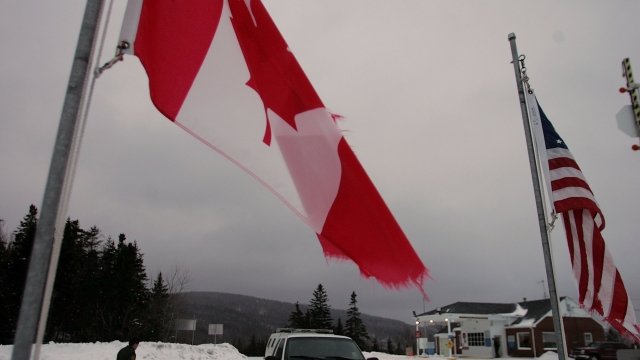 Applicants get points for things like language skills, family ties and job offers. Those points can add up to permanent residence.

Canada made history in 1967. It was the first country in the world — ever — to go to a merit-based point system for immigration.

The goal of the system is summed up in this one sentence on a government immigration website: "We choose skilled immigrants as permanent residents based on their ability to settle in Canada and take part in our economy."

So beginning in '67, an applicant's race, color, nationality — that no longer mattered. To be blunt: Being white ceased to be the advantage it had been.

Canada, like many countries, had a history of discriminatory immigration policies dating back to post-World War I. Among those excluded until the mid-20th century were Communists, Mennonites, Austrians, Hungarians, Turks and Chinese. A ban on black immigrants had been considered in 1911 but not implemented.

To get a satisfactory annual review, judges will now need to clear at least 700 cases a year.

The restrictions began to ease after World War II, in part because of a demand for labor to fuel the country's robust economy. But racial discrimination wasn't officially nixed until '62.

More specifically, applicants must first score at least 67 on a 100-point scale to be considered for immigration to Canada. Points are awarded in these six categories:

• Language skills: The more fluency in English and French, Canada's official languages, the more points you get.

• Work experience: Points are applied based on how skilled the job is, plus how many years the applicant's been doing it.

• Age: Young people in the 18-35 bracket get the maximum, and then points decrease with age.

• Adaptability: This includes things like family ties to Canadians or past visits to the country.

About 63 percent of those granted legal permanent residence are admitted for their economic skills.

Canadians? They like the system, and they like immigration. Recent polls show 82 percent think immigration has a positive impact on the economy, and support for migration has actually increased in recent years.

One public affairs professor put it this way: "The advantage of our system is the people who come in — everyone agrees they've passed some sort of merit system. The Canadian population in particular is more willing to buy into immigration. They can see it's managed, and that's an advantage."