Is Marvel Sticking It To Fox By Canceling 'Fantastic Four'? 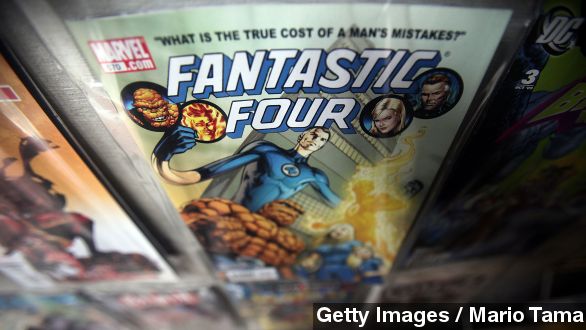 The final chapter of Marvel's "The Fantastic Four" series is in the works.

That's according to the series writer, James Robinson, who revealed the news at New York Comic Con Sunday.

This really isn't too shocking. Earlier this month, comic blog Bleeding Cool reported that a Marvel source had said the company was going to stop publishing "The Fantastic Four" comics as a way to snub 20th Century Fox, which owns the film rights to the series.

"The belief inside the higher echelons of Marvel is that promoting these properties in comics only benefits Fox's movies at the expense of those from Marvel Studios."

Not surprisingly, Fox was the one to decide to reboot the film franchise, not Marvel. This is because it's the only way for Fox to hold onto its license for the film rights to the series. The new film stars Kate Mara and Miles Teller and is slated for release in 2015.

Now, Marvel did work closely with Fox on the original movie in 2005 and its sequel "Fantastic 4: Rise of the Silver Surfer" two years later. (Video via 20th Century Fox)

And on top of all that, readership for the series, which started all the way back in 1961 and was once one of Marvel's biggest titles, has dropped significantly over the years.

For example, the series was ranked No. 7 on Diamond Comic Distributors' list of the 100 Top Comics in February. But by September, the series' ranking had dropped all the way to No. 98.

And then there was the fact that Hachette Book Group released the synopsis for an upcoming "Fantastic Four" comic book fittingly called "The End is Fourever" late last week.

So, like we said, not a huge shock when the official announcement finally came.

According to iDigital Times, Robinson did give a little insight into the foursome's last hurrah. He said Mr. Fantastic, the Invisible Woman, the Thing and the Human Torch will all be back wearing those infamous blue uniforms and that characters important to the series will be popping in.

But many, including Robinson, are telling readers not to give up on "The Fantastic Four" just yet.

A writer for IGN pointed out that the Invisible Woman appeared in last month's issue of "The Avengers," so there's a possibility the other characters could be seen in other Marvel comic series.

And Comic Book Resources reminds us that Marvel has a history of relaunching series, writing, "The odds are certainly low that the book won't be published again in the future."

And who knows? Maybe a positive response to next year's "Fantastic Four" film will cause Marvel to rethink its decision. The series' final comic book is set to be released in June.

This video includes an image by Loren Javier / CC BY ND 2.0 and music from Keven MacLeod / CC BY 3.0.