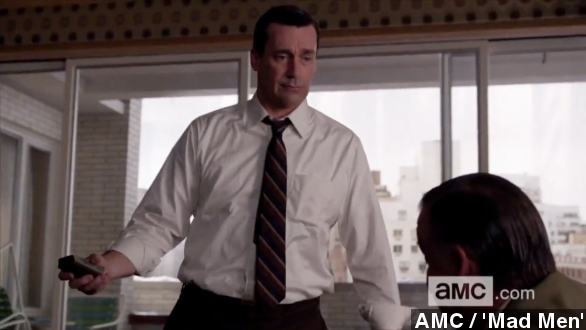 By Erik Shute
April 15, 2014
"Mad Men" is struggling to find its footing as its final season premiered to only 2.3 million viewers, down 32 percent from last season.
SHOW TRANSCRIPT

​Just like the silhouetted man from its infamous opening, "Mad Men"'s ratings are in a free fall.

According to a Nielsen poll, a mere 2.3 million prime-time TV viewers tuned in to catch the drama's seventh and final season premiere Sunday. It's "Mad Men"'s least-watched season opener since 2008, and many critics are questioning the show's stability.

For those keeping count, that's a steep 1.1 million decline from the number of viewers who watched the premiere last season.

Entertainment Weekly quotes a statement from the show's network, AMC, saying "Mad Men" is "the most upscale show on ad-supported television among adults 18-49, and sees significant time-shifting activity."

The network reinforced its stance saying the 2.3 million viewer count was close to the entire season six average. And let's not forget: An encore showing of the first episode made a grand total of 4.4 million viewers. (Via AMC)

Numbers aside, entertainment media outlets think there are a few other factors that could predict a slow and sad finish for Don Draper and the gang.

The foremost reason: HBO's sword-swinging series "Game of Thrones" is ramping up its newest season. "Mad Men"'s slow-churning drama might not be match for blood-spilling episodes like last Sunday's containing the fan-dubbed "Purple Wedding." "Game of Thrones" has kept an average of 6.5 million viewers glued to the premium network every week.

As The Globe and Mail puts it, "It's not exactly sixties fashion, but perhaps it's time for Don Draper to consider a sword and codpiece?"

Don might have to resort to something flashy, especially as AMC continues its strategy of splitting "Mad Men"'s final season into two parts.

AMC announced last fall it would stretch season seven into two sets of seven episodes, the second of which will air in 2015. It's the same strategy it used with the former hit drama "Breaking Bad."

An AMC spokesman told the Los Angeles Times the network wants to give "Mad Men" the "same showcase," but that might be too long for fans to hold interest if the opener is any indication.

While "Mad Men"'s ratings linger, it seems the show's parent network might be competing against itself in the process.

Despite critics holding "Mad Men" to such high standards every season, The Hollywood Reporter isn't convinced the show needs to attract new viewers.

"As AMC's first foray into the scripted arena, it became an instant critical and awards darling. Since The Walking Dead became the network's (and all of TV's) de facto hit, Mad Men has been very much about the prestige."

And awards it has won. According to IMDb, "Mad Men" has taken home 68 pieces of hardware including multiple Golden Globes and Emmys since its debut in 2007. The second episode of its final season will air this coming Sunday, April 20.