Is Kim Jong-Un's Sister Being Groomed For Leadership? 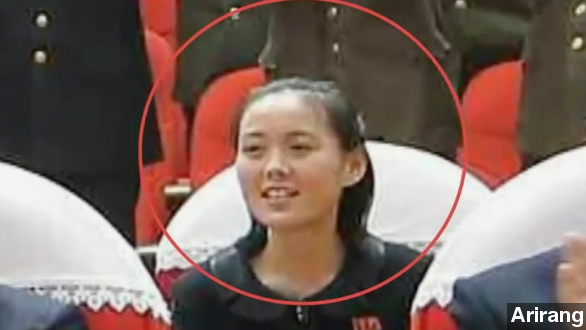 Information about the North Korean government's inner workings are hard to come by, which is why news this week of leader Kim Jong-Un's sister moving up the ranks has many Hermit Kingdom watchers intrigued.

KCNA Watch, an independent group focusing on North Korea, carried an article from the government's news agency which detailed Kim Jong-Un's April visit to a cartoon film studio. Buried at the bottom of that article was a list of government officials who accompanied him, including his sister — vice department director Kim Yo Jang. (Video via Euronews)

Kim Yo Jang is reportedly in her mid-20s and is the youngest of the late North Korean ruler Kim Jong-Il's seven children. (Video via Arirang)

The Washington Post reports Kim Yo Jang and her older brother both studied together in Berne, Switzerland under assumed names. Many outlets believe she was first seen publicly at her father's funeral in 2011 and first mentioned by name this past March.

More recently, she was even believed to be running North Korea during her brother's extended absence.

"It's very difficult for the North Korean system to run without one of the Kim family, at least titularly, in charge," Victor Cha said in an interview with CNN.

It's that sort of thinking about North Korea's familial dynasty that has led some people to believe Kim Yo Jang is being groomed for leadership — even though this is the first time she's been given an official title and her actual duties are unknown.

Of course, in North Korea, being family doesn't always guarantee a permanent seat at the table. Several reports indicate Kim Jong-Un executed his own uncle for charges related to treason.

But a writer for Time says the Kim name is an important part of North Korea's political structure. "Since the deification of the Kim clan is what makes North Korea tick, providing a symbolic link to the past makes sense, even while power passes to the next generation."