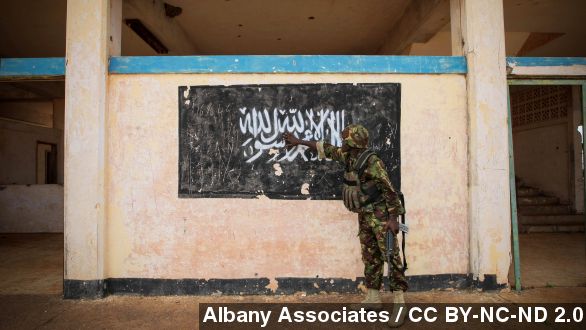 Al-Shabab has claimed responsibility for an attack on a bus in northern Kenya, the worst attack since its leader was killed in a U.S. airstrike back in September.

The attack, which killed 28 people has highlighted the continued threat the terrorist group poses, especially in the country's north, where the government has less military presence, and the country borders Al-Shabab's native Somalia. (Video via Channel 4)

Analysts say the group is trying to foment a religious war in Kenya, calling Saturday's attack retribution for a major raid Kenyan authorities carried out on a handful of mosques in Mombasa, in which they recovered dozens of weapons. (Video via eNCA News)

A muslim politician from the region where the attack took place told the BBC "The aim is to create conflict between the Muslims and the non-Muslims in this country ... We have had a lot of the Muslim leaders come out today [Saturday] and strongly condemn this..."

And a witness said the gunmen singled out the non-muslims for killing.

"They asked them to recite verses of the Koran, and those who failed to recite the verses were shot," said survivor Douglas Ochwodho.

Despite the brutality of the attack, officials in the region say Al-Shabab is weakening, and this attack and others like it are just trying to mask that.

"Al-Shabab is losing a lot of territory as we know, and they're also on the back foot. So they say this latest attack on civilians is an act of desperation," said Al Jazeera's Hamza Mohamed.

Reports of Al Shabaab's weakening have been coming out of Somalia for a while now, long before the group's leader Ahmed Godane died in a U.S. airstrike.

Earlier this month a Ugandan military official said the group has lost most of its military strongholds in Somalia thanks to efforts from the African Union Mission to Somalia, or AMISOM.

AMISOM is a force made up of troops from a number of countries, including Uganda, Burundi, Ethiopia and Kenya, among others, and it has been fighting Al Shabaab in Somalia since 2007. (Video via CCTV)

Kenyan security forces say they have already carried out attacks against the Al-Shabab militant camps that supplied the gunmen for Saturday's attack.