Is Hitting A 50% Recycling Rate Realistic? 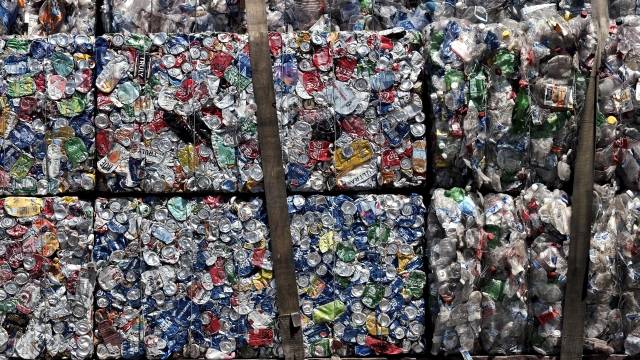 SMS
Is Hitting A 50% Recycling Rate Realistic?
By Newsy Staff
By Newsy Staff
April 20, 2022
The EPA set the national recycling rate to 50% by 2030, but what will it take for citizens and businesses to hit that goal?

In 2018 — according to the latest data available — Americans generated more than 292.4 million tons of waste. That's all the packaging, clothing, bottles, food scraps, newspapers, batteries and more that gets tossed to the curb each week, averaging out to 4.9 pounds per person per day.

About a third of that waste was recycled and composted. The EPA estimates that up to three quarters of our waste is recyclable, with over 60% of the average landfill composed of paper, metals, glass, plastics and food waste.

That's why a few years ago, the EPA set a goal to get the National Recycling rate to 50% by 2030. As part of President Biden's $1.2 trillion infrastructure deal, $75 million is going toward supporting the Recycling Act, which will help provide grants through the EPA to "educate households and consumers about their residential and community recycling programs to improve participation and reduce contamination."

But when only a third of what is currently collected gets recycled, how exactly are they, meaning all of us, going to hit that 50% mark?

First, let's take a step back to look at how recycling has changed over the years. 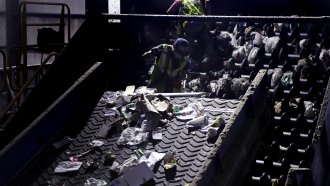 Why Does The U.S. Produce So Much Waste?

Recyclable paper first dates back to 9th century Japan. Almost as soon as the Japanese learned how to produce it, they figured out how to recycle it and use it again.

Cut to World War II — as part of the war effort, things like tin, rubber, steel and paper were recycled in order to save money and channel resources. Even cooking grease was sent to local meat dealers for use in explosives.

Even in the 1950s, there were things like the milkman, who would take your used milk containers to be sterilized and used again because it was cheaper than creating something new. Most plastic was a very durable product, like Tupperware, and was designed for long-lasting use.

Up until now, recycling was more about reusing the resources we could get our hands on and less about "saving the planet."

It was also around this time — in 1956 — that Lloyd Stouffer, editor of Modern Packaging Inc., famously declared, "The future of plastics is in the trash can," bringing the idea of single use plastics to life. Over the course of seven years, a culture shift happened led by these manufacturers, which encouraged a disposable mindset that has persisted to this day.

"Half of the world's plastic was only produced in the year 2000, so we often act like this is a system that's like old and very entrenched," said Kendra Pierre-Louis, senior reporter at Gimlet/Spotify with the How to Save a Planet podcast. "But plastic as a disposable... is very different from plastic as a durable good... I think it's important to sort of separate mindset from behaviors, which is we are being conditioned to throw things out. We are being conditioned to treat things as disposable, in part because there's such a barrier to it, like what is your alternative? If you want take-out, what are you going to do?" 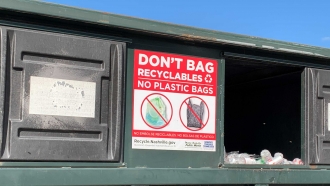 It's Tough To Recycle Plastic In The U.S.

The rise of single-use plastics has basically been the logjam in how we process waste, but who's at fault here?

Only 3% of waste is generated by consumers, while the remaining 97% is industrial/manufacturing.

"Definitely in the past, a lot of the blame has been sort of essentially just shifted onto the consumer, and I very much disagree with that," said Kieran White, chief operating officer at Lasso Loop Recycling. "I think it's definitely an all-around view and problem, and this legislation around extended producer responsibility coming in, which would basically mean that the original manufacturer of the container and will purely be responsible for getting that container back, and if they don't get it back from the tax, basically. So that's something that's really coming in, trying to push it back to the manufacturer.... Recycling companies will probably say that it's the manufacturer's fault for not making the product so they can recycle. The manufacturers will say if they recycle, it's because they can't recycle products they're making, and then both will say it's the consumers fault for buying it."

Lasso Loop has created the first in-home recycling device. To understand how their appliance works, let's first take a look at how our current recycling system works.

Take a plastic bottle. You finish the rest of your water and put it in that bright blue bin. It is then taken to what is known as a Material Recovery Facility, or MRF, where it is separated, cleaned, sterilized and palletized. That is what is ultimately sold back to manufacturers to make another plastic bottle.

This looped process is the goal, but what happens more often than not is the bottle is contaminated with either food or other material, so it becomes cheaper for waste management to choose sending the trash to a landfill rather than to a recycling center.

But Lasso Loop is basically a small MRF in your kitchen that will ensure your stuff gets recycled, while essentially cutting out the middleman.

"If you don't control the input, there's no way you can control the output," White said. "So there are three processing streams. If it's a water bottle, that stuff would go down the plastic ventilator, and if it's glass, it goes down into the crusher, and if it's metal, it goes into the shredder and all of these are kept separate."

Six to eight times per year they will pick up those recyclables and take them straight to the manufacturer, ensuring the product does indeed get recycled. But with a price tag of $5000 and first orders not shipping worldwide until 2025, change will not be immediate.

"From my perspective, it's not possible," White said. "50% of the U.S. still doesn't have curbside recycling, and the U.S. average of 50% is a pretty daunting task. It's just tangibly not possible with current technology... I think there needs to be new infrastructure to achieve that and away from the current system... I think there's so much more innovation around recycling that can be done away from the traditional extremes." 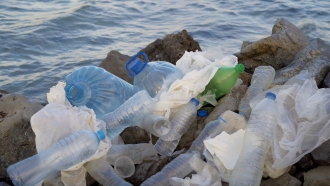 Most metals and glass can be recycled nearly indefinitely. Plastic, however, cannot. Depending on the type of plastic, PET bottles versus clam shells, a typical plastic container can be recycled between three to 10 times before eventually ending up in a landfill or being incinerated. That's because every time a plastic bottle is recycled, it loses some of its chemical composition and new virgin material needs to be added to fill in the chemical gaps.

"Usually when we recycle plastic products, they end up well known as down cycling, so they don't end up back as a plastic bottle or as a piece of cling wrap," Pierre-Louis said. "They end up as carpet or as insulation or astroturf, and so at some point in that life cycle, it generally will end up in the garbage."

So in this eternal struggle between consumer and manufacturer, what are we to do? Well, one company is taking it to the beach.

Liquid Death, whose tagline is "Death to Plastic," has leaned into some wild advertising techniques, while promoting their "water in a can" approach that is infinitely recyclable.

Evian, the third largest water bottle manufacturer in the world, has committed to only producing plastic bottles made from 100% recycled materials by 2025. To do this, they are working to create a "circular model" across their business, and they have partnered with Loop Technologies to create a newer kind of plastic that can be recycled over and over.

McDonald’s has even announced plans to source all of its packaging from renewable, recycled or certified sustainable sources across their 39,000+ restaurants in over 100 countries by 2025. So, things do seem to be taking a turn in the right direction, but to loop back to the original question, is it going to be enough to hit that 50% goal?

"I mean, it depends on what you're talking about," Pierre-Louis said. "If you're looking at aluminum and metals, we're already at 47%, so if you're talking about plastic, I seriously doubt it. It's just not. The only way you get to that kind of recycling rate for plastic is if we remove the financial support for fossil fuels that make them so cheap, such that it is cheaper to recycle plastic than it is to make it from virgin materials. The whole setup is pushing us towards disposability and really, if you want to push back against an injunction, to some extent it has to be regulatory... Metal recycling works, paper recycling works, glass works. And so, let's focus on plastic and more on the aspects of recycling that we know are effective. So there are systems that people are thinking of in a conceiving of it or trying to be more engaged in, and that's where I would sort of put it on whoever is listening or watching and ask them what do they think creatively could be implemented in their home community? Because really, it needs to be community, system wide. It's not something that you and I can do on an individual level."