Is 'Game Of Thrones' TV's King? 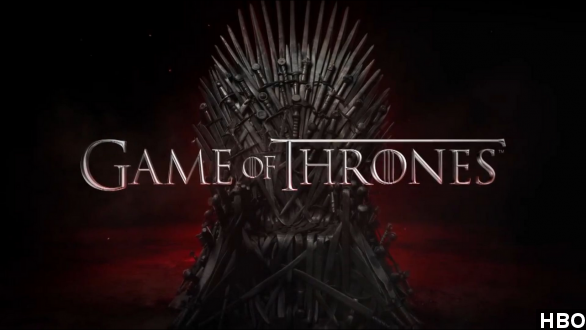 Lords and Ladies, winter is coming with the return of Game of Thrones.

HBO's epic fantasy drama is slated to premiere Sunday for its much anticipated fourth season, and with a slogan like "All men must die", it's sure to live up to the no-character-is-safe reputation that has made it so popular.

The series cemented its place as HBO's flagship show last summer when, its third season, averaged 14.2 million viewers per episode — a 20 percent bump from the series' viewership the previous year.

WinterIsComing.net, a Game of Thrones news site, attributes the increase in part to the now-legendary "Red Wedding" episode, which saw three of the show's major players unexpectedly killed off in a matter of minutes.

With impressive numbers like those, Game of Thrones is poised to take the throne as HBO's most watched show of all time.

This chart released by HBO last summer shows the "Most Watched Seasons Of HBO Original Series Since 2004." As you can see, Game of Thrones stands far beyond some pop culture favorites such as Sex And The City, and sits second only to the heralded fifth season of The Sopranos, which aired in 2004. (Via Vulture)

Although it's number two right now, many believe Game of Thrones will dethrone The Sopranos this season. But while it might be king-in-waiting of the HBO realm, how does it size up against the other rulers in the TV universe?

Pretty well, actually. Despite HBO being a subscription service, TV Guide currently ranks Game of Thrones the second most popular television show — beating out long-running successes like ABC's Dancing with the Stars and Fox's American Idol.

But with big popularity comes some extremely high expectations. Some of the media's more privileged received early access to the season's first three episodes, and so far the consensus is that it lives up to the hype.

The Hollywood Reporter's Tim Goodman writes: "Game of Thrones proves yet again why it's one of the rare genre series to not only be taken seriously but to prove its worth season after season. ... This is a show with no rules — and that's partly why tension and expectation are both always running high."

You can catch the fourth season of Game of Thrones, and all the gruesome deaths likely to come with it, on HBO and HBO GO beginning Sunday at 9 p.m. Eastern.