Is Donald Trump Serious About 2016? 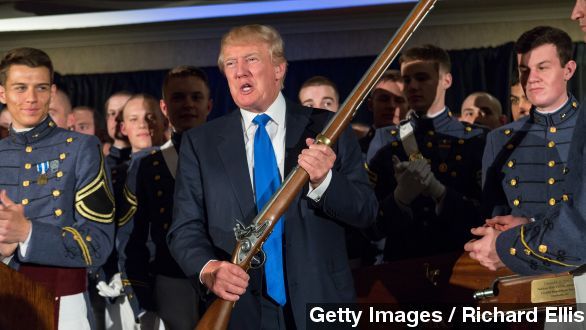 “Okay, if I had to ask you on a scale of one to 100, where are you on the scale in terms of where you think you are in deciding to run?” Sean Hannity asked Donald Trump.

“One in 100 I would say 75 and 80, I am really inclined. I want to do it so badly," Trump said during the 2015 Conservative Political Action Conference.

Alright, so Donald Trump says he’s looking to run for president in 2016. But how serious is he, really?

"More serious than ever." At least that's what he told The Washington Post in February.

But he told Time the same thing in 2011. We’re not kidding, word-for-word, he told Time he was “more serious than ever” in seeking a 2012 presidential bid — something he never went through with.

Okay, but this year he’s pushing back “The Apprentice,” saying he’s not ready to renew for its 15th season. That’s got to count for something.

Thing is, he also pushed back “The Apprentice” in 2011, telling NBC he wasn’t ready to sign up for three more seasons.

“But the fact is, a lot of people in the polls don't vote for me, because they think I'm just having a good time. They think that I'm promoting "Celebrity Apprentice" which I'm absolutely not,” Trump said during a 2011 Fox News interview.

So kind of looks like a repeat of 2011, right? But he’s also making some moves this time around that he hadn’t done previously.

That includes hiring Corey Lewandowski, the former director of “Americans for Prosperity,” as a senior political adviser and to direct a potential campaign in New Hampshire.

He’s also picked up Chuck Laudner, who would do the same in Iowa. He formerly served as Rick Santorum’s advisor in the swing state.

Still, not everyone is convinced “The Donald” is really going to go for it this year — or if he’ll even be relevant if he does.

Chris Cillizza at The Washington Post says Trump’s built up too much polarizing press in the years to be an effective candidate — specifically that birth certificate argument he was so adamant about a few years ago.

“Now I know that he’s taken some flack lately. But no one is happier, no one is prouder to put this birth certificate matter to rest than The Donald,” said President Obama during the 2011 White House Correspondents Dinner.

Writing for Time, Michael Scherer has a different suggestion — that Trump is simply hyping up publicity so he has a bargaining chip with NBC on renewing another season of his show.