Is 'Deep Sleep' An Option For Humans-To-Mars Mission? 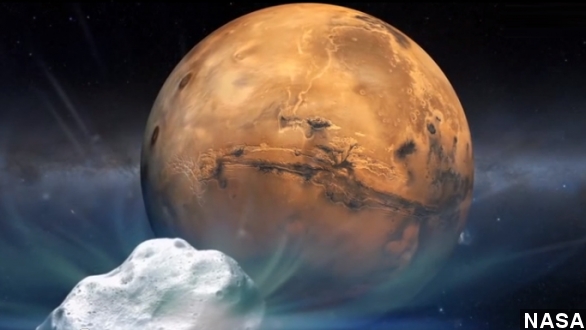 SMS
Is 'Deep Sleep' An Option For Humans-To-Mars Mission?

By Christine Slusser
October 7, 2014
Scientists are considering the possibility of putting people into torpor — or a deep sleep — in order to send people to Mars.
SHOW TRANSCRIPT

Humans have been dreaming about going to Mars for a very, very long time.

And now that we have rovers on Mars, we know we don't have to fear aliens who will attack Earth ... and also happen to hate yodeling. (Video via Warner Bros. / "Mars Attacks!")

The next step? From rovers on the Red Planet to humans. But ... a machine is one thing, how do we get people there?

Going to the moon seems simple in comparison. Trained astronauts get into a spaceship and rocket off into space, eventually landing on the moon in just a few days.

But Mars ... that's a 180-day trip, being optimistic. The amount of supplies needed would be astronomical.

So, scientists have come up with a potential option ... put people into what's called torpor. It's a deep, hypothermic sleep, almost like how some animals hibernate in winter. (Video via BBC)

KLAS: "NASA hopes by reducing an astronaut's metabolic function, it could cut back on costs."

WTIC: "The weight of the cargo on the ship would be nearly cut in half. ... This isn't just something that's going to happen anytime soon, it still requires a lot of testing."

Here's how torpor works: if given coolant through the nose, the body temperature is lowered by one degree every six hours. Another option is a chemical-induced hibernation. That won't affect body temperature.

Yes, this all sounds like something out of a science-fiction movie, but torpor has been used for trauma patients regularly for at least the last decade. (Video via Oxford Medical Videos)

However, the longest anyone has been in torpor is about a week.

If scientists do figure it out, the Mars One project may pick up the technology, too.

In April 2013, the program was launched for people interested in becoming permanent Martians. The launch date is 2023. And, according to Popular Science, these people don't have the option of coming back.