Is Croatia The Answer For Refugees Stranded In Serbia? 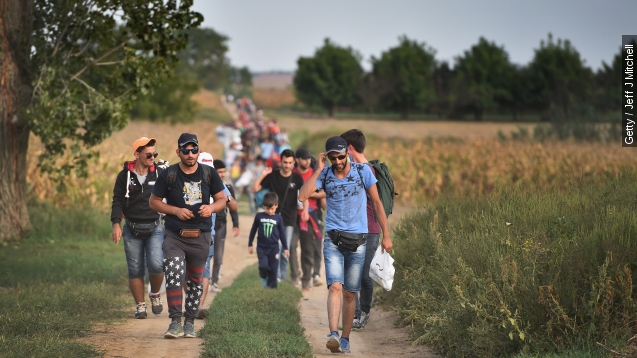 Thousands of refugees in Serbia who are finding it increasingly hard to cross into Hungary may have a new alternative: Croatia.

Croatia isn't yet a part of the Schengen Area, which allows people to move through its European member countries without checks at the border or passport control. That means refugees might still face processing in Slovenia, which is a member.

But in contrast to the barbed-wire fences and tear gas they've faced at the Hungarian border, Croatia's prime minister says his country is "ready to accept these people, regardless of their religion and the color of their skin, and direct them to the destinations where they wish to go." (Videos via RT, HRT Vijesti)

The BBC's Lyse Doucet reported, "The first thing they're hearing from the Croatian border guards is, 'Don't be scared.'"

The BBC reports scores of people have taken up that invitation and are leaving the Hungarian border for the Croatian border. (Video via BBC)

But a critical part of that route is Slovenia.

To travel freely through the Schengen Area, you have to be registered in the first member country you enter. That's the rationale Hungary has used for detaining refugees in camps. (Videos via EurActiv, CBS)

It's not clear how Slovenia will receive them, but there's reason to think refugees will have an easier time there than in Hungary. (Video via YouTube / KvisualS)

Slovenia is considerably smaller than Hungary and may not have the resources to detain refugees, even if it wanted to. (Video via Slovenian Interior Ministry)

Where the refugees go from there is another matter of contention, with Germany pressuring the rest of Europe to take in their fair share as well. (Videos via Channel 4, Phoenix)