Is Clinton Trying To Distance Herself From 'Hawkish' Claims? 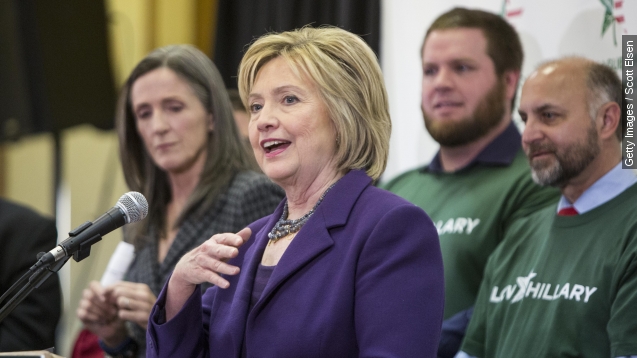 SMS
Is Clinton Trying To Distance Herself From 'Hawkish' Claims?
By Eugene Daniels
By Eugene Daniels
November 10, 2015
Presidential candidate Hillary Clinton has long been called a war hawk, but is there evidence to back up the claim?
SHOW TRANSCRIPT

Tuesday, presidential candidate Hillary Clinton reportedly said she was not ready to support a declaration of war on the terrorist group ISIS.

She reasons that a formal war on ISIS would be costly and difficult to fight, since the terrorist group is so spread out.

The stance could be seen as an attempt to combat rhetoric that Clinton would be quick to use military force if elected president. (Video via Hillary for America)

"Of all the candidates on the Democratic side, you are, rightly or wrongly, considered to be the most hawkish," Rachel Maddow said to Clinton in MSNBC's recent Democratic Forum.

But is that assessment of Clinton fair? Well, let's look at the evidence. (Video via Hillary for America)

In 2002, Clinton famously voted for the Iraq War when she was a senator. It's something she has since called a mistake. (Video via C-SPAN)

As secretary of state, Clinton supported a larger troop surge in Afghanistan than President Obama did, but she did oppose a troop surge in Iraq during her first presidential campaign.

And even now, as a presidential candidate, she has consistently supported a no-fly zone over Syria. It's something that puts her more in line with the GOP contenders than her Democratic opponents. (Video via MSNBC)

Clinton has denied the war hawk claim, saying force should be the "last resort, not the first choice" but that she thinks it's "irresponsible" to rule out force entirely. Either way, painting her as hawkish could be an effective way to hurt her campaign's chances. A poll in 2014 found 47 percent of Americans think the U.S. role in the world should be dialed down. (Video via Hillary for America)