Is Campbell's Soup 'Mmm, Mmm Good' Enough To Save Keurig? 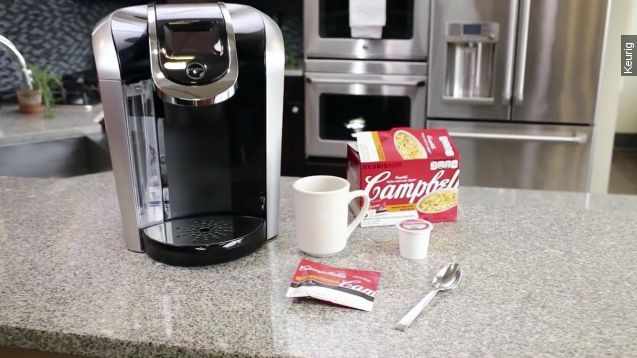 "Your Keurig 2.0 brewer isn't just beautiful," said someone in a promotion.

It's also having a terrible year, and it's hoping that Campbell's can do for the company's stock price what chicken noodle soup has always done for its patrons: Make 'em feel better.

Coffee brewing company Keurig Green Mountain has partnered with the 146-year-old Campbell Soup Co. to produce "Campbell's Fresh-Brewed Soup," which is Keurig's first official venture into food outside of beverages.

According to to Campbell, "More than 80 percent of people who buy Keurig pods also buy Campbell’s soup." But a writer for Consumerist says that correlation could be deceptive:

"Probably more than 80 percent of people who use dish soap also eat breakfast cereal, but that doesn't mean you should combine them."

Keurig currently has a ton of partnerships with major coffee brands, like Starbucks, Dunkin Donuts and Folgers. The company has also partnered with major soda brands for the upcoming Keurig Kold.

But none of these partnerships or announcements have managed to save stock prices. Since this time last year, Keurig's stock price has fallen more than 50 percent.

In this latest quarter, revenue fell 5.2 percent, while sales of Keurig's brewers and accessories fell 26 percent.

The Keurig Campbell's pods cost $11.99 for an eight-pack. The pods will come in the Homestyle Chicken and Southwest-Style Chicken broths, and both varieties are 70 calories or less per serving.