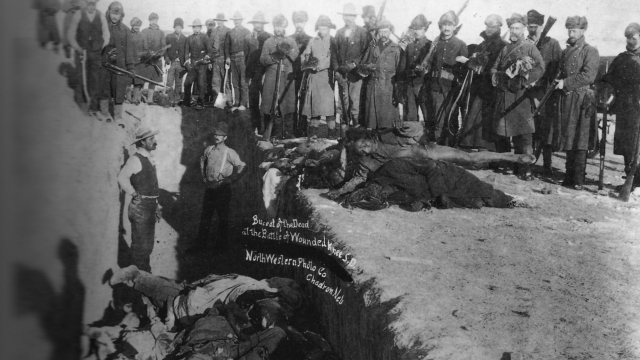 SMS
Is Calling Orlando The Deadliest Mass Shooting Overlooking History?
By Jamal Andress
By Jamal Andress
June 20, 2016
Back in 1890, the U.S. Army 7th Cavalry Regiment killed as many as 300 Native Americans — men, women and children. Should that be counted?
SHOW TRANSCRIPT

You might notice this criticism of the media that says the Pulse nightclub shooting is not the worst shooting in U.S. history. A lot of that is referring to the Wounded Knee Massacre.

Back in 1890, the U.S. Army 7th Cavalry Regiment killed as many as 300 Native Americans — men, women and children.

There are a few major points I want to make. First among them: This is not a tragedy contest. A life lost is a life lost, period.

That being said, there are differences between the Wounded Knee Massacre and the Orlando mass shooting that, in many eyes, put those two incidents in different categories.

Incidents like the Virginia Tech massacre and the Newtown shooting fall under one modern definition of a mass shooting: one or few lone shooters, public space and multiple victims.

However you define it, it might be most accurate to call the Pulse nightclub shooting the deadliest in modern U.S. history.

This video includes clips from WFTV, CNN, WKMG and images from the Library of Congress and Getty Images. Music provided courtesy of APM Music.