Is Baseball A 'Tired Sport'? Nationals' Bryce Harper Thinks So 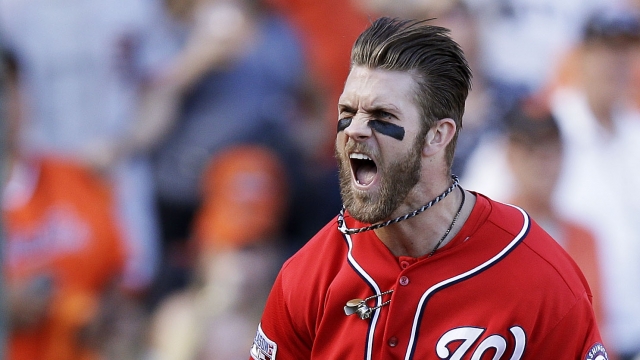 If baseball is known for its lengthy list of unwritten rules, then Washington Nationals outfielder Bryce Harper is known as the guy who doesn't mind breaking a few of them.

In a recent interview with ESPN The Magazine, Harper, the 2015 MLB National League MVP, was critical of some of those unwritten rules, calling baseball a "tired sport."

"It's a tired sport, because you can't express yourself. You can't do what people in other sports do. I'm not saying baseball is, you know, boring or anything like that, but it's the excitement of the young guys who are coming into the game now who have flair."

Harper continued to say he takes issue with how if you "pimp a homer" you might get one "right in the teeth" from the pitcher come next at bat.

And, in Harper's defense, he's not wrong. MLB suffers from a bit of an older fan base compared to other major sports. It's outpaced only by professional golf for the percentage of fans 55 or older.

Several players, including Harper, have been called out for having a little too much swagger.

MLB teams also have far more games than any other major sport — 162. That's 146 more chances to "pimp" a score than in the NFL.

MLB, for the record, does bill itself as America's pastime — a pastime that, from Harper's point of view, needs to change.

To read more from Harper's interview with ESPN, head over to the ESPN website.

This video includes clips from Fox Sports and Gatorade, and images from Getty Images.