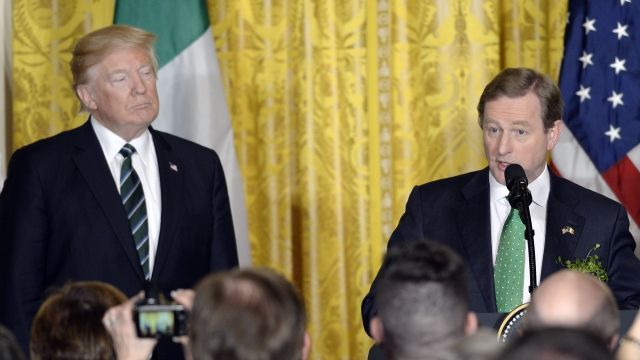 Ireland's taoiseach highlighted the role of immigrants in his speech as President Donald Trump looked on.

President Trump received a pointed message on immigration from Ireland's leader, Enda Kenny, during a St. Patrick's Day speech at the White House.

"It's fitting that we gather here each year to celebrate St. Patrick and his legacy. He too, of course, was an immigrant. … For many people around the globe he's also a symbol of — indeed the patron of — immigrants. … And four decades before Lady Liberty lifted her lamp, we were the wretched refuse on the teeming shore," Kenny said.

The pro-immigrant remarks come as the Trump administration's second travel ban was shot down by two federal judges.

Undocumented immigration was, and still is, a major issue in Irish politics. In the 19th and 20th centuries, millions of Irish immigrants sailed across the Atlantic to America, leaving their famine-stricken homeland for economic opportunities.

Many Irish immigrants were met with hostility. Some employers refused to hire them, and several Catholic churches were burned down as part of the backlash.

Those days are gone. But today, many Irish-born people living in America are concerned about Trump's stance on immigration.

There are an estimated 50,000 undocumented Irish immigrants in the U.S. who could be deported under Trump's immigration policy. Kenny advocated for them to get a path to citizenship.

He said, "It would remove a burden of so many that they could now stand in the light and say, 'Now I'm free to contribute to America as I know I can.' That's what people want."