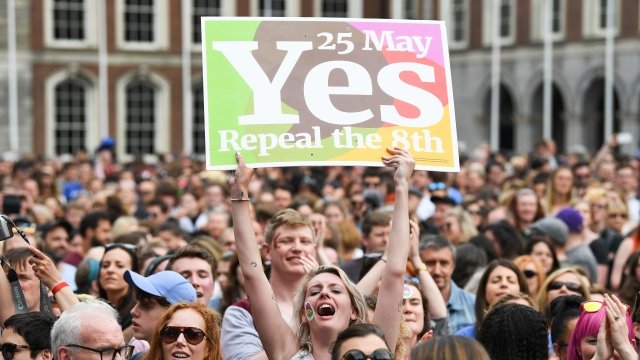 About two-thirds of the people voting in the referendum voted in favor of amending Ireland's constitution.

Ireland has voted to overturn the country's abortion ban.

About two-thirds of the people voting in the referendum voted in favor of amending Ireland's constitution. The country's Eighth Amendment granted equal rights to a mother and her fetus. In 2013, Ireland did legalize abortions under certain conditions — such as if a woman's life is at risk.

Ireland is a majority Catholic country, but belief has been declining in recent years. The church didn't take a leading role in the new referendum. And Ireland's prime minister called the vote "the culmination of a quiet revolution."

The Irish Parliament will now have to pass new laws governing abortion. The government has proposed giving pregnant people unrestricted access to abortions up to 12 weeks of pregnancy and allowing later abortions in certain circumstances.