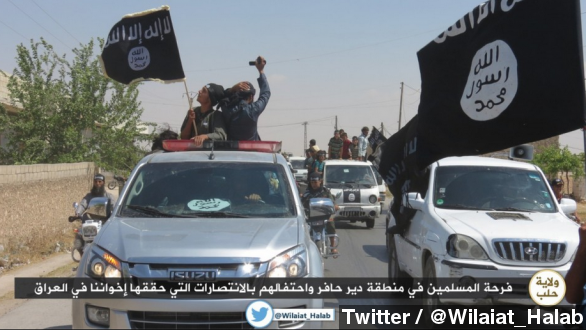 By Jake Godin
June 12, 2014
As ISIS pushes south toward Baghdad, Iraq's government asks for assistance and Kurdish forces take advantage of the power vacuum in the north.
SHOW TRANSCRIPT

​Just days after seizing Iraq's second-largest city, the Islamic State of Iraq and Syria, or ISIS, is pushing toward Baghdad at an alarming speed while Kurdish forces have claimed more territory in northern Iraq.

ISIS, a Sunni jihadist offshoot of Al-Qaeda, has entrenched itself in large parts of Syria and Iraq over the past year. As their name suggests, they seek to create an Islamic state separate from any current governments in the region. (Via YouTube / Nasrun min Allah)

The Sunni militants claim to have surrounded Samarra, home to the Al-Askari shrine, one of the most holy Shia Muslim places of worship. However, The Daily Star reports that Iraqi military managed to rebuff the attack and force them to go around the city.

Al-Qaeda attacks on the shrine in 2006 and 2007 sparked waves of Shiite and Sunni retaliatory violence that almost plunged the country into a civil war. (Via UNESCO)

Compounding the threat from militants pushing south toward Baghdad are ethnic Kurds in northern Iraq, who have reportedly taken control of the major oil city of Kirkuk.

The BBC writes that Kurdish forces claimed control of Kirkuk once Iraqi military forces abandoned their posts. A Kurdish MP reportedly told the BBC that the Kurds are willing to stand with the Iraqi government in fighting ISIS.

​But the seizure of Kirkuk has been enough to affect oil prices, as The Wall Street Journal's MarketWatch reports rising prices for crude oil during European trading hours after news of the city's takeover broke.

Amidst the violence, Iraq's government is attempting to garner outside assistance combating the militants.

The Wall Street Journal reports that Iraq has privately signaled to the U.S. that it would be OK with any air strikes via drones or manned aircrafts to help stem the militants' advance.

While officials have declined to say whether the U.S. would agree to this, The New York Times writes that Iraq has had a difficult time gaining U.S. assistance in the past.

"Iraq's appeals for a military response have so far been rebuffed by the White House, which has been reluctant to open a new chapter in a conflict that President Obama has insisted was over when the United States withdrew the last of its forces from Iraq in 2011."

According to the Fars News Agency, both Iran and Turkey have voiced support for Iraq if the situation escalates further.