Iraqi Kurdish Referendum Could Be A First Step Toward Statehood 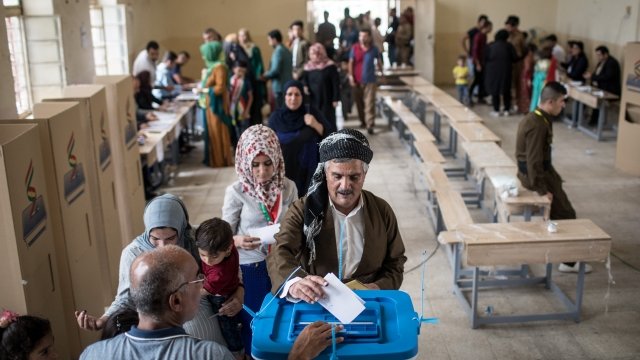 The referendum, if successful, could kick-start secession talks between Baghdad and the Kurdish regional capital, Irbil.

In northern Iraq, the Kurdish people are voting whether or not to seek independence from Iraq.

A referendum was held Monday in the region that makes up Iraqi Kurdistan, which is under the de facto control of the Kurdistan Regional Government. There are roughly 30 million Kurds living in Iraq, Iran, Syria and Turkey.

The Kurds exist separately from Arabs as their own ethnic group. They have their own language, history and culture. They are often considered the largest ethnic group without an internationally recognized homeland.

The referendum, if successful, wouldn't create an independent state right away. But the Kurdish government hopes it will kick-start secession talks between Baghdad and the Kurdish regional capital, Irbil.

But the idea of an autonomous Kurdistan doesn't seem all that popular with anyone but the Kurds — at least, not right now.

Iraq, Iran, Syria and Turkey have registered strong opposition to the vote. Those countries all have notable Kurdish minorities, and a successful referendum for Iraqi Kurds could inspire similar movements abroad.

The United States also said it didn't support the vote as scheduled, saying it was a distraction from the fight against ISIS. The United Nations secretary-general said the vote could have "potentially destabilizing effects" on the region.

Official results are expected to be announced later this week. In the meantime, Iraq and Turkey will stage joint military drills along the Turkish border with the Kurdish region in Iraq.