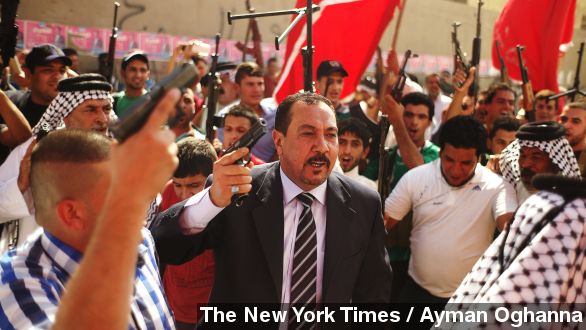 By Elizabeth Hagedorn
June 15, 2014
Iraqi troops, backed by Shiite volunteers, claim to have regained control of some territories that had fallen into the hands of ISIS.
SHOW TRANSCRIPT

For days Sunni Islamist militants with their sights set on Baghdad have been moving south toward the capital. Now Iraqi security forces appeared to have slowed their advance.

Jihadi fighters from the extremist group known as ISIS are nearing Baghdad’s doorsteps. Iraq’s Shiite-led government wants to regain the territory ISIS has already captured, while fending off its march to Baghdad. (Via Euronews)

Thousands of Shiite volunteers answered a call issued by a prominent cleric to take up arms and defend the country against ISIS. They hope to reinforce the security gap left by the thousands of Iraqi troops who have fled their posts. (Via ITN)

The Washington Post describes the scene. "Men young and old piled into taxis, trucks, police vehicles and minibuses and drove noisily through the streets on Saturday, honking horns and waving an assortment of weapons."

Earlier in the week, ISIS easily overran Iraq’s second-largest city of Mosul. The Al-Qaeda inspired group wants to set up its own Islamic state across Iraq and Syria. (Via Nasrun min Allah)

In the past week the Sunni insurgents, backed by Iraqis loyal to Saddam Hussein, have taken the control of Mosul, Saddam Hussein’s hometown of Tikrit and the oil refining town of Baiji. (Via BBC)

France 24 reports the army and the Shiite militia Saturday took back control of some territory around the city of Samarra and have driven the insurgents back into the surrounding desert.

This video posted by the Iraqi Ministry of Defense shows what the ministry says are airstrikes on militants north of Samarra.

The counterattack came the same day the U.S. deployed an aircraft carrier to the Persian Gulf. Meanwhile, Iranian President Hassan Rouhani told a news conference he would consider working with the U.S. to fight ISIS.