Iraqi Forces Face Crucial Battles As They Move Into Mosul 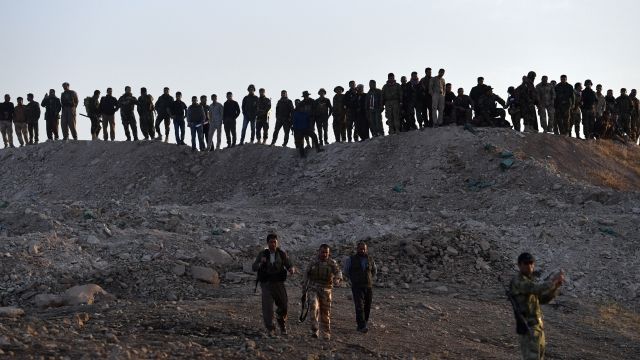 SMS
Iraqi Forces Face Crucial Battles As They Move Into Mosul
By Lindsey Pulse
By Lindsey Pulse
October 31, 2016
Joint forces have been moving in since mid-October. The battle is now expected to be fought "street to street."
SHOW TRANSCRIPT

Iraqi special forces have moved in on the ISIS-held city of Mosul.

Mosul is a vital hub for ISIS, and an offensive attack by Iraqi troops began in mid-October. Recent numbers from the U.S.-led coalition commander put about 3,000 to 5,000 ISIS fighters inside the city.

Not many details of the current battle have been released, but ABC reports forces are under heavy fire.

Car bombers are reportedly trying to stop the troop's advances.

The battle for Mosul has been going on for quite some time. ISIS overtook the city more than two years ago. And in March, the Iraqi government announced its plan to reclaim the area.

Since the offensive began, the terror group has used civilians as human shields to deter airstrikes, performed mass executions and set fire to oil wells.

In recent weeks, ISIS has lost some of its foothold in the northern and eastern parts of Mosul's countryside, but the battle is expected to take place "street to street."