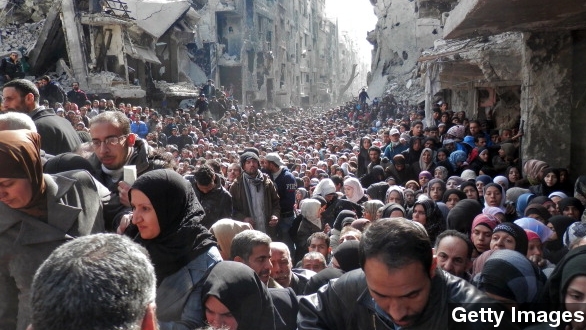 "[The fighters] started shooting at them to execute them," survivor of a Mosul prison massacre M.A. told Human Rights Watch. "After this, they burned the entire place." (Video via Human Rights Watch, YouTube / ولاية الرقة)

Human Rights Watch issued its annual report Thursday detailing atrocities and abuses worldwide in 2014. Militants fighting for ISIS in Iraq and Syria were only a small part of the 656-page report.

The report begins with four major sections, followed by a country-by-country analysis. The first section is "Tyranny's False Comfort."

The section confronts the civil war in Syria, ISIS and other conflicts in Egypt, Gaza, Ukraine and terrorist organizations in Africa. (Video via Euronews)

HRW's second section is "Internet at a Crossroads."

"Senior officials are investing themselves with powers that they're not entitled to, and they're doing it without any kind of public consent," Edward Snowden told NBC in an interview aired in June 2014.

HRW says the U.S. and United Kingdom have defaulted into "collect it all" tactics for citizens' data, vilified encryption to protect data and failed to lead the world in online freedom. (Video via Discovery)

"Mass surveillance is by nature indiscriminate and it is presumptively illegal," writes HRW's Cynthia Wong.

HRW says human rights were "broadly trampled on" during the Sochi Olympics as Russia tried to show itself off to the world. (Video via Human Rights Watch)

"How many people are going to die so that this World Cup can take place?" ESPN's Jeremy Schaap asked as part of an investigation into the Qatar World Cup construction.

Future mega-sporting events HRW says should be closely monitored include the 2018 World Cup in Sochi, the 2022 World Cup in Qatar and the 2022 Winter Olympics in either China or Kazakhstan. (Video via ESPN)

To read the full Human Rights Watch 2015 World Report, click the link in the text of this story.