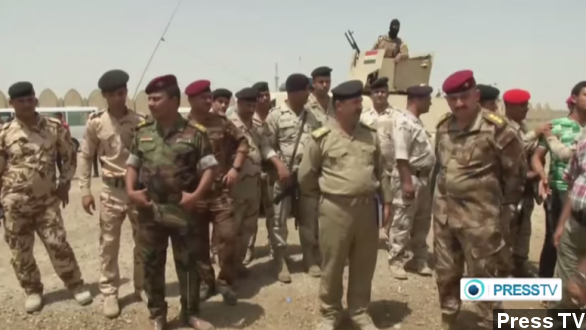 By Elizabeth Hagedorn
June 14, 2014
On Friday, Iraq's top Shiite cleric called on his followers to join the fight against the jihadists marching toward Baghdad.
SHOW TRANSCRIPT

Hundreds of Shiite fighters in Iraq are now rushing to the frontlines to defend their country from Al-Qaeda-inspired extremists.

In theory, these Shiite volunteers would help fill the security gap left by the fleeing Iraqi army. (Via Press TV)

Iraq’s top Shiite cleric called on his followers Friday to take up arms and defend the country against fighters from the extremist splinter group known as Islamic State of Iraq and Syria — or ISIS for short. (Via PBS)

All of this, The New York Times says, has further fueled concerns of Iraq descending into a full-blown civil war. “The confrontations suggested that Shiites and Sunnis would once again engage in open conflict for control of Iraq, as they did during the height of the American-led occupation that ousted Saddam Hussein.”

Sunni-Shiite tensions have simmered for centuries but have heightened in recent years.

As a writer at the New Yorker puts it: "Maliki has centralized power within his own circle, cut the Sunnis out of political power, and unleashed a wave of arrests and repression.​ ... With nowhere else to go, Iraq’s Sunnis are turning, once again, to the extremists to protect them."

Those extremists now have control of both Mosul and Saddam Hussein's hometown of Tikrit, but their stated goal is to take Baghdad. (Via ITN)

CBS’s Clarissa Ward reports that, with the insurgents advancing toward the capital, the Iraqi army is scrambling to regain control.

CLARISSA WARD: “The government doesn't appear to have any real strategy other than re-mobilizing these Shiite militias, which only inflame those sectarian tensions."

Meanwhile, Mosul has fallen under sharia law. ISIS has banned freedom of religion and is requiring women stay at home and wear a veil. More than 500,000 citizens have fled the city.