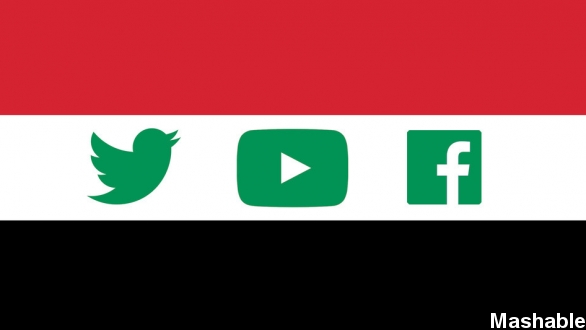 By Madison Burke
June 13, 2014
The Iraq government has blocked social media sites out of fear ISIS, or ISIL, would use the networks to mobilize.
SHOW TRANSCRIPT

The Iraqi government has blocked social media sites out of fear the terrorist group the Islamic State of Iraq and the Levant, also known as ISIS or ISIL, was using the outlets to gather forces and plan another attack.

A Guardian reporter covering the Middle East tweeted Friday, "Facebook blocked in #Iraq. Govt fears it was used by #ISIS to organize and mobilize." (Via Twitter / @martinchulov)

A Huffington Post blogger tweeted those who are aren't able to access their social media accounts are getting a message saying the site has been blocked by the Iraqi Ministry of Communications. (Via Twitter / @RuwaydaMustafah)

ISIS has now taken over much of northern Iraq and is reportedly heading toward the capital city of Baghdad. (Via CNN)

The militant group is known to utiliize social media in several different ways. International Business Times states the group has posted YouTube videos of its speeches and sends tweets to thousands of supporters.

Business Insider writes, "​Countrywide bans of social media platforms are designed to impede groups from organizing, communicating, and most importantly, from mobilizing."

According to VentureBeat, both YouTube and Twitter reps say they are aware of the block and are looking into the situation.

A Facebook spokesperson was critical of the government's decision to block Internet access, telling VentureBeat: "We are disturbed by reports of access issues in Iraq and are investigating. Limiting access to Internet services — essential for communication and commerce for millions of people — is a matter of concern for the global community."

According to The Washington Post, the Iraqi government has only been able to successful block parts of the country —mainly in and near Baghdad — because they've lost so much ground to ISIS already. The writer says that means "losing control of cyberspace as well."

President Obama reiterated Friday his administration is looking to provide assistance to the Iraq government, but is not considering putting boots on the ground.