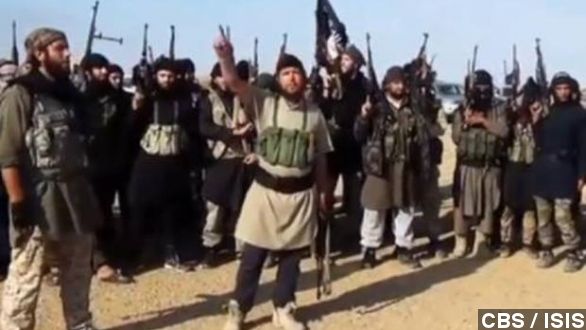 Security forces in Iraq are scrambling to protect Baghdad from advancing insurgents as the country inches closer to an all-out sectarian conflict.

Insurgents first swept across the Syrian border over the weekend and captured Mosul, Iraq's second largest city, on Tuesday. Since then, the group known as the Islamic State of Iraq and Syria, or ISIS, has pressed south following a major highway leading to the capital. (Via The New York Times)

U.S.-trained Iraqi security forces put up almost no fight in the many of the areas under siege. Many abandoned their posts, leaving behind American-provided weapons and vehicles, now ironically in the hands of Islamic militants. (Via MSNBC)

The three-day lightning offensive has sparked the biggest crisis Iraq has faced since sectarian violence erupted in the country following the U.S.-led invasion in 2003. (Via CBS)

Rejected by Al-Qaeda because of its brutal tactics, ISIS is seeking to create an Islamic state across Sunni regions of Iraq and Syria. With the group's rapid advance across Iraq's north, that goal appears within reach. (Via CNN)

With the group now less than 100 miles away from Baghdad, President Obama says the U.S. won't put troops on the ground, but he didn't rule anything else out when it comes to the deteriorating situation. (Via The White House)

PRESIDENT OBAMA: "We want to make sure that we've gathered all the intelligence that's necessary so if in fact I do direct an order — any actions there — that they're targeted, they're precise and that they're going to have an effect." (Via Fox News)​

A Pentagon official told CBS Baghdad is "in jeopardy," so the Iraqi government has authorized the U.S. to perform air strikes in the country, but "we are no closer (to air strikes) today than yesterday." ​He added it is unclear how effective strikes might be. (Via CBS)

But as the U.S. weighs military options, British Foreign Secretary William Hague took military intervention off the table for his country, saying: "it is for the Iraqi leadership primarily to respond." (Via BBC)

Shiite-governed Iran says it has deployed Revolutionary Guard units to Iraq to help secure Baghdad, although the U.S. contests that claim. ISIS has imposed Sharia law in many captured cities, including Mosul.