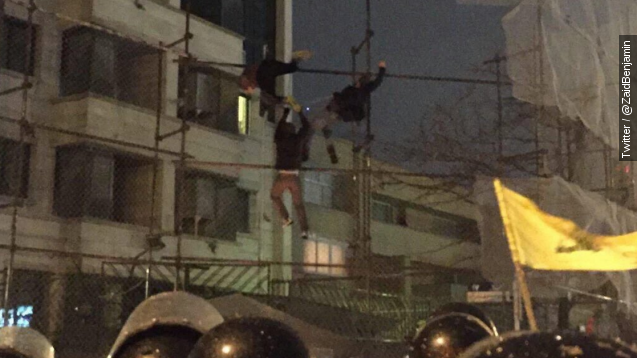 After news of the executions spread, protesters broke in and then set fire to a part of the Saudi Arabian Embassy in Tehran. Saudi Arabia says the executed prisoners were all convicted of terrorism charges. (Video via Twitter / @ZaidBenjamin)

Police have since cleared the area surrounding the embassy, extinguished the fire and arrested some of the protesters according to journalists in Tehran.

Nimr who was the leader of anti-government protests, was charged with sedition, disobedience and bearing arms. He was officially sentenced to death in October. (Video via Memri TV)

Saudi Arabian officials claim the first mass execution of 2016 was to prevent violence against the state. But analysts quoted in The New York Times point out the "grouping of Sheikh Nimr with hardened jihadists was a warning to domestic dissidents."

The executions have drawn condemnation worldwide, including from Saudi Arabia's allies. The U.S. State Department released a statement, raising questions about the county's legal process and expressing concern the execution could exacerbate "sectarian tensions at a time when they urgently need to be reduced."

Criticism from Saudi Arabia's regional rivals was more pointed. Iran's supreme leader Ali Khamenei equated Saudi beheadings with those of the terrorist group ISIS. Saudi Arabia has denounced the comparison, arguing unlike ISIS, there is always a trial before an execution. (Video via Press TV)