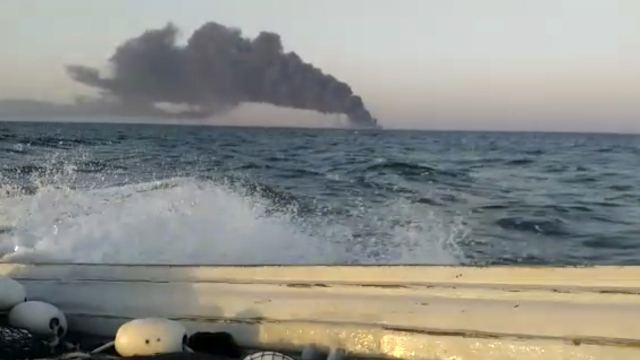 Black plumes of smoke billow above what was Iran’s largest navy ship.

The British-built ship… called the Kharg… now sinking into the Gulf of Oman after catching fire early Wednesday morning, according to Iranian state media.

Firefighters fought the blaze for 20 hours, according to the Fars News Agency.

Iranian authorities say the naval ship was headed to open waters for a training mission.

Iran says 400 sailors and trainee cadets were evacuated, 33 were injured.

Iranian authorities say an investigation into the cause of the fire is underway, the location of the sinking ship already attracting attention.

The naval ship sank close to the Iranian port of Jask, near the Strait of Hormuz, a region rife with geopolitical tensions spanning over two years between Iran and Israel in particular.

The Israeli prime minister’s office did not respond to a request for comment from the Associated Press.