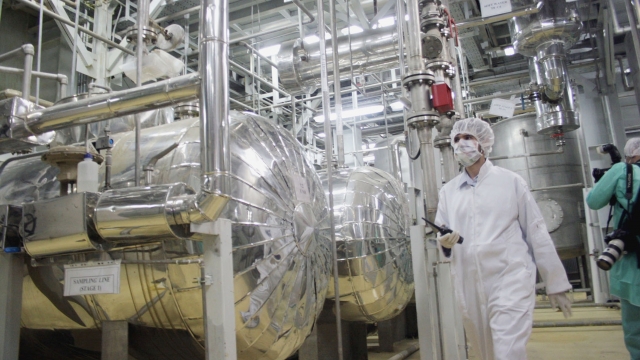 SMS
Iran Won't Give Europe More Time To Ease Pressure From US Sanctions
By Katherine Biek
By Katherine Biek
June 19, 2019
Iran vowed to violate terms of the 2015 nuclear deal if the other signatories didn't lessen the pressure put on it by U.S. sanctions by July 7.
SHOW TRANSCRIPT

Iran is sticking to the 60-day deadline it previously gave European powers to lessen the pressure put on the country by U.S. sanctions.

Back in May, Iran gave other parties in its nuclear deal a July 7th deadline to help ease the sanctions.  If the countries weren't successful, Iran vowed to increase its enrichment of uranium and take measures to update its heavy water reactor.

The European Union has been trying to prop up the international deal on Iran's nuclear program, despite the unilateral withdrawal of the U.S. from the agreement last year.  Reuters now reports that foreign ministers from France, Germany and the U.K. are considering a visit to Tehran in an attempt to sway Iranian officials from violating the commitments it agreed to under the deal.

If they do go, they won't have much time to negotiate. Iran warned on Monday that it's stockpile of enriched uranium could exceed its 300 kilogram limit by June 27.

And on Wednesday, a spokesman for Iran's Atomic Energy Organization said the country would not extend the 60-day deadline for sanctions relief, noting "the second phase will be implemented exactly as planned."