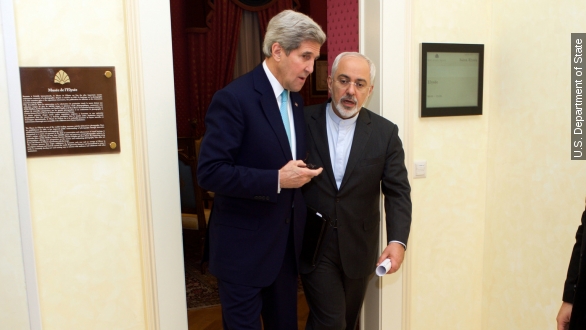 A week ago, nuclear negotiators were touting their teamwork. Now, they can't seem to agree on the agreement. (Video via C-SPAN)

Broadly speaking, it would put limits on Iran's nuclear program in exchange for sanctions relief. It's just an initial agreement that sets the stage for a final deal, due in June.

Contrast that with: "It has never been our position that all of the sanctions against Iran should be removed from day one," White House spokesman Josh Earnest said.

So, it's a question of whether sanctions will be lifted gradually or immediately. It's easy to see why each side is interpreting things differently.

For the Iranians, ending the sanctions that have crippled their economy is their main priority. For the U.S., hanging on to those sanctions is the only way to ensure Iran is sticking to its end of the bargain. (Video via Voice of America)

The Obama administration has downplayed its differences with Iran, but they're pretty clear-cut.

This White House fact sheet says sanctions will be lifted only if Iran "verifiably abides by its commitments" — commitments like reducing its number of centrifuges and limiting its uranium enrichment.

"We and our international partners will provide relief in phases," U.S. Secretary of State John Kerry said.

The Iranian fact sheet, as translated by Harvard's Belfer Center, says nothing about phases. Instead, "all of the sanctions will be immediately removed after reaching a comprehensive agreement."

For what it's worth, the man who has the final say on Iran's position in the nuclear talks also weighed in Thursday.

Iran's supreme leader questioned on Twitter whether negotiators planned to "stab #Iran in the back over the details." Those details face a June 30 deadline.