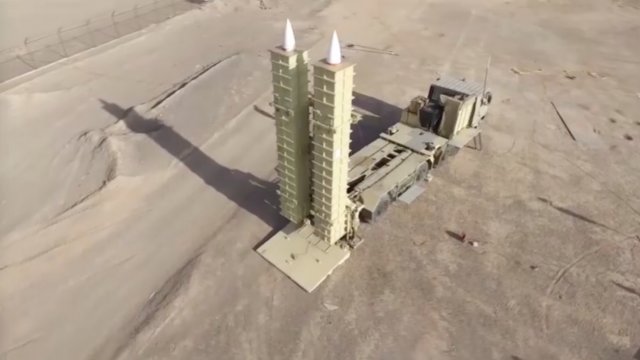 This is the Bavar-373 — Iran's new long-range surface-to-air missile system.

The country displayed the domestically built defense system during an unveiling ceremony Thursday.

Iranian President Hassan Rohani attended the unveiling. He was quoted as saying: "Now that our enemies do not accept logic, we cannot respond with logic."

Media outlets in Iran are describing the Bavar-373 as a rival to Russia's S-300 missile system. Iran's defense minister said the new system can detect targets nearly 200 miles away and destroy them at approximately 125 miles away.

Military analysts have warned that Iran tends to overstate what its weapons are capable of. Still, concerns over Tehran's ballistic missile program have grown since the U.S. pulled out of the 2015 nuclear agreement.

In June, Iranian forces shot down an unmanned U.S. military drone with a surface-to-air missile.

U.S. officials said Iran shot down the drone while it was in international airspace above the Strait of Hormuz. But Iran said the U.S. drone was flying over Iranian airspace when it was shot down.

And earlier this week, the U.S. blamed Iran for shooting down another American drone over Yemen. A U.S. official told CNN the surface-to-air missile used to attack the drone was provided to Houthi rebels by Iran.