Iran Says Latest US Sanctions Closed 'The Path To Diplomacy' 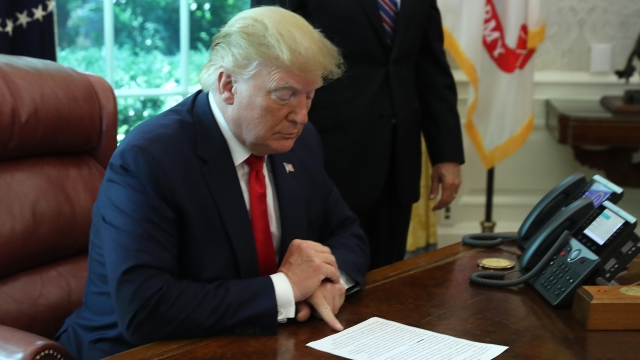 A spokesman for Iran's Foreign Ministry said Tuesday "the path to diplomacy" between Iran and the U.S. is now permanently closed.

His statement came after President Donald Trump imposed what he called "hard-hitting" sanctions against Iran on Monday.

"Sanctions imposed through the executive order ... will deny the supreme leader and the supreme leader's office and those closely affiliated with him and the office access to key financial resources and support," President Trump said. "The assets of Ayatollah Khamenei and his office will not be spared from the sanctions."

The president told reporters that the sanctions are a response to Iran's "increasingly provocative actions." Tensions rose between the two countries last week after Iranian forces shot down an unmanned U.S. military drone it said was trespassing in its airspace.

President Trump said the sanctions will stay in place until Iran ends its "pursuit of nuclear weapons," sponsorship of terrorism and "belligerent acts" directed against the U.S. and its allies.

"Never can Iran have a nuclear weapon ... I look forward to the day when sanctions can be finally lifted," President Trump said. "And Iran can become a peaceful, prosperous and productive nation."

While in Israel on Tuesday, U.S. National Security Adviser John Bolton told reporters that President Trump is still willing to negotiate with Iran.

"All that Iran needs to do is walk through that open door," Bolton said.

Iranian President Hassan Rouhani called the sanctions "outrageous and idiotic" in a televised address and accused the U.S. of lying about wanting to start talks back up.