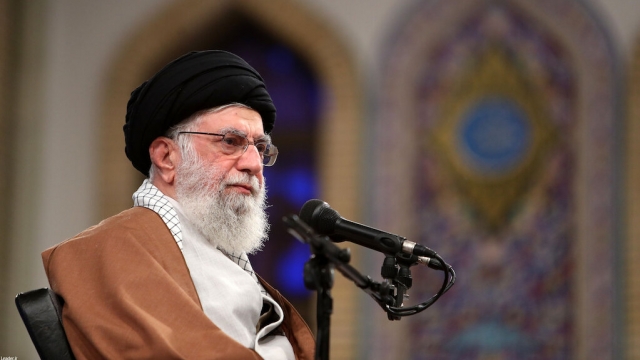 Iranian Supreme Leader Ayatollah Ali Khamenei has renewed a ban on talks with the U.S.

While speaking to thousands of students on Sunday, Khamenei said the U.S. has always been an enemy of Iran. He said: "Those who believe that negotiations with the enemy will solve our problems are 100 percent wrong."

The remarks came ahead of the 40th anniversary of Iranian protesters seizing the U.S. embassy in Tehran — holding 52 Americans hostage for 444 days. Reuters reports the anniversary is marked with annual anti-American demonstrations.

The relationship between the U.S. and Iran has grown increasingly tense in the past year after President Donald Trump pulled the U.S. out of a 2015 nuclear deal. Since then, the Trump administration has gradually reimposed sanctions on Iran.

Khamenei, who has the final say in all state matters, previously said Iran wouldn't resume talks with the U.S. unless it rejoins the 2015 nuclear deal and lifts all of those sanctions.

And if they did resume, Khamenei said talks wouldn't go anywhere — "not only they would not have gained anything, the sanctions and pressures would not have been reduced, and there would have also been new demands as soon as the negotiations had started."

Toward the end of October, Treasury Secretary Steven Mnuchin vowed to increase sanctions on Iran. He said the goal wasn't to hurt the people of Iran but so "Iran stops their bad activities."