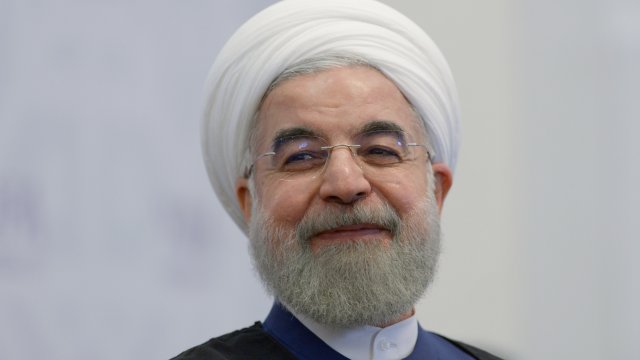 President Hassan Rouhani said unless the U.S. lifts economic sanctions against Tehran, any meeting between the two leaders would just be a photo op.

Iran's president has changed his tune about sitting down for talks with President Donald Trump.

President Hassan Rouhani said during a televised speech Tuesday that unless the U.S. lifts economic sanctions against Tehran, any meeting between the two leaders would simply be a photo op.

Iranian media outlets quoted President Rouhani as saying: "We will not witness any positive development unless the U.S. abandons the sanctions and corrects the wrong path it has chosen."

During a press conference at the G-7 summit in France Monday, French President Emmanuel Macron told reporters Rouhani was willing to meet with any political leader if it's in Iran's interest.

Macron said he hoped to arrange a meeting between Presidents Rouhani and Trump in the coming weeks. And President Trump later said he too was open to meeting with Rouhani "if the circumstances were correct."

Relations between the U.S. and Iran have become increasingly strained ever since last year, when President Trump pulled the U.S. out of the 2015 nuclear agreement. The U.S. gradually reimposed sanctions on Tehran after leaving the deal, which hit the country's economy hard. Tehran has responded by breaking some restrictions on its nuclear program that were set under the agreement.