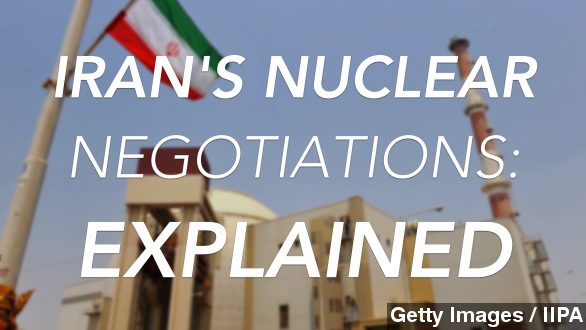 SMS
Iran's Nuclear Negotiations, Explained
By Jake Godin
By Jake Godin
February 7, 2015
The final deadline for negotiations surrounding Iran’s nuclear program is June 30, but will both sides be able to reach common ground by then?
SHOW TRANSCRIPT

“So we're going to get this done, I hope, but we're not cocky about it. We're not overconfident. It's going to take a lot of work, and in the end, it's really up to Iran to make the choice, to prove that its program is indeed peaceful,” U.S. Secretary of State John Kerry said in a video in November 2013.

John Kerry is in Munich meeting with Iran’s Foreign Minister Javad Zarif for talks over Iran’s nuclear program. The deadline for a political agreement is March 31.

“We are willing to take concrete measures to guarantee that our nuclear program will always remain peaceful,” Iranian Foreign Minister Javad Zarif said in a video in July 2014.

The talks haven’t gone smoothly. Two deadline extensions have been made to the Joint Plan of Action, which was originally supposed to conclude last July. The new, final deadline for a complete deal is now June. (Videos via European External Action Service)

Still, there has been some progress. With the original implementation of the Joint Plan of Action, some sanctions were gradually lifted in exchange for Iran freezing its nuclear program during negotiations. (Video via Manoto 1)

While negotiations have been mostly kept secret, the former Iranian ambassador to Germany points out in an op-ed for USA Today that Iran has a number of confidence-building measures currently on the table. (Video via Al Jazeera)

Those include diluting current stocks of enriched nuclear materials, reducing nuclear centrifuges from 22,000 to less than 10,000 and cooperation with an international nuclear inspection agency. (Video via ODN)

But there are still those who are wary of how negotiations are proceeding, particularly in the U.S.

“So, I’m very uneasy about the way our negotiations with Iran are going on. I think it’s not a bad thing if they’re reminded that sanctions can be put on and will be tough,” former Secretary of State George Shultz said during an U.S. Senate Armed Services Committee meeting.

The Washington Post’s editorial board is also concerned with how negotiations are going so far, suggesting the U.S. is giving up too much on its end by both tolerating Iran’s nuclear program instead of outright ending it and not countering Iran’s influence in the area. (Video via The White House)

Writing for The National Interest, Paul Pillar says it would be impossible to completely eliminate Iran’s nuclear capabilities as The Post suggests. (Video via Office of Iranian Pres. Hassan Rouhani)

Pillar also says the U.S.’s reluctance to countering Iran’s influence in regions such as Syria with Hezbollah is more about erring on the side of caution with jumping into another war rather than conceding to Iranian influence.

In their latest meeting in Munich, Kerry reportedly stressed the March deadline to Zarif.