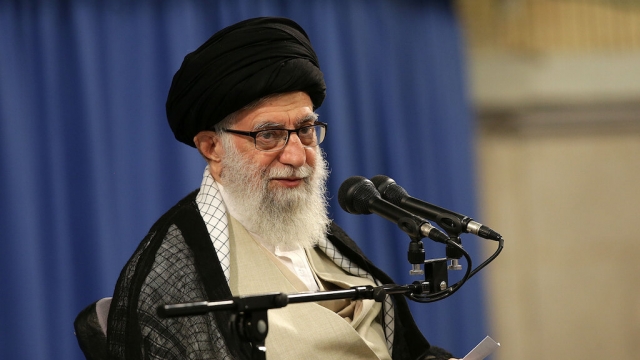 "Iran will continue the process of cutting down on its #JCPOA commitments."

But it speaks volumes to Tehran's dedication to the 2015 Iran nuclear deal.

In a meeting with foreign leaders Tuesday, Ayatollah Ali Khamenei accused the U.K., Germany and France of not holding up their end of the agreement.

According to his website, he said: "As stated by our foreign minister, ... Europe has had 11 commitments, none of which it has met. ... But what did we do? We acted based on our commitments, and even beyond that. ...  Now that we have started to reduce our commitments, they step forward. They are very insolent, and they have not abided by their 11 commitments."

He's referring to one of the biggest trade-offs in the Iran nuclear deal: Iran had to reduce its uranium stockpile and centrifuges. In exchange, the U.S. and the EU would lift sanctions on oil and other trade and banking systems.

A U.S. official told Reuters back in 2015 the deal freed up about $100 billion in frozen Iranian assets. It was a major relief for the economically strained country — that is, until this happened:

"I am announcing that today the United States will withdraw from the Iran nuclear deal," President Trump said.

Since the U.S. pulled out of the deal, the Trump administration has reinstated some sanctions on Iran and threatened penalties for countries that continued to trade with it.

So the U.K., Germany and France decided to work around the sanctions with a system called Instex. It skirts the U.S.' rules and lets countries trade some consumer goods, like food and pharmaceuticals, with Iran.

But it doesn't cover oil, one of the country's biggest exports. That's why both the Ayatollah and Iran's foreign minister say the three European countries are breaching the deal.

But the European countries aren't taking these accusations or Iran's actions too seriously.

"For the time being, none of the parties to the agreement has signaled their intention to invoke this article," EU Foreign Policy Chief Federica Mogherini said.

"We think there is still some closing, but small, window to keep the deal alive," he said.

In the meantime, the Ayatollah confirmed Iran will continue reducing its commitments to the deal.