Iran Ready To Negotiate With U.S. — After Sanctions Are Lifted 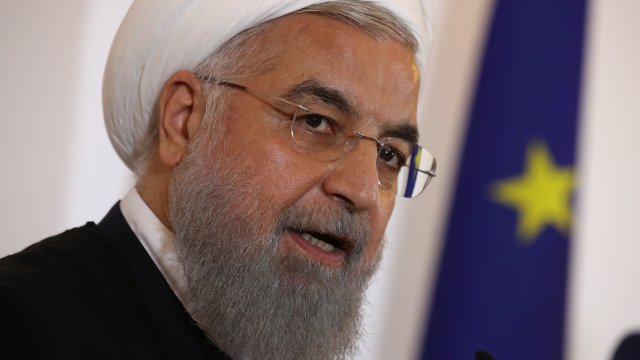 SMS
Iran Ready To Negotiate With U.S. — After Sanctions Are Lifted
By Briana Koeneman
By Briana Koeneman
July 15, 2019
President Hassan Rouhani said during a speech Sunday: "The moment you stop sanctions and bullying, we are ready to negotiate."
SHOW TRANSCRIPT

Iran's president says he's willing to hold talks with the U.S. — as long as Washington lifts economic sanctions against his country and rejoins the 2015 nuclear deal.

According to President Hassan Rouhani's official website, he said during a speech Sunday: "We are always ready for negotiation. The moment you stop sanctions and bullying, we are ready to negotiate."

The U.S. has gradually reimposed sanctions on Iran after pulling out of the Joint Comprehensive Plan of Action last year. That's hit Iran's economy hard and escalated tensions between the two countries.

President Donald Trump and Secretary of State Mike Pompeo have indicated they would negotiate with Iran without any preconditions.

But when responding to Rouhani's remarks Sunday, Pompeo told The Washington Post: "This is a path that the previous administration had gone down and it led to the JCPOA, which this administration, President Trump and I both believe was a disaster."