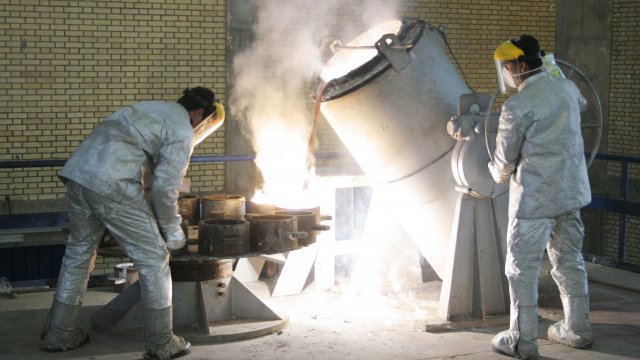 Iran has officially surpassed one of the limits set in the landmark nuclear deal.

In response to a question from the press Monday, Iranian Foreign Minister Javad Zarif said the country has more than 300 kilograms of low-enriched uranium on hand. That was the maximum set by the deal. The International Atomic Energy Agency, which is responsible for monitoring Iran's compliance, confirmed the country's stockpile has surpassed the limit.

Zarif said Iran took this step because European countries haven't done enough to protect it from the impact of U.S. sanctions.

The fate of the deal was thrown into question when President Donald Trump withdrew the U.S. from it in May 2018. Over the next six months, the Trump administration reinstated all the sanctions that had been lifted, and Zarif argues that effectively allowed Iran to ramp up its nuclear activity.

Iranian officials cited two separate provisions in the Joint Comprehensive Plan of Action as justification to resume developing its stockpile.

Next, Iran says it will work toward enriching uranium past the 3.67% limit set in the deal. Here's why that number matters.

The enrichment process increases the percentage of a particular uranium isotope. When uranium is used as fuel for nuclear reactors, it's typically enriched to somewhere between 3-5%. To be used as a weapon, it needs to be enriched to at least 90%.

Iranian officials say they are open to re-negotiating with the U.S., but not while sanctions are in place.