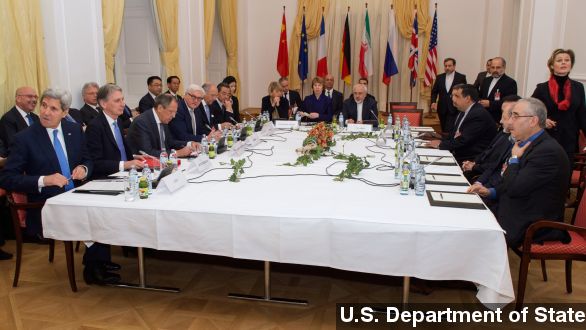 International negotiators are extending the deadline for a nuclear deal another seven months after failing to walk away with any sort of agreement.

Even after a full year of direct talks, there was little expectation they would, given comments like this from U.S. Secretary of State John Kerry.

"That doesn't mean that we agree on everything. Obviously, there are gaps," Kerry said during a recent briefing in Paris.

If that sounds familiar, it's because that's pretty much the exact same line Kerry and other diplomats gave this past summer after their original six-month deadline ended with no final agreement.

"There are also very real gaps," Kerry said in July.

Broadly speaking, a deal would have involved Iran scaling back its nuclear program in exchange for some relief from international sanctions.

Iran insists it needs its nuclear program for peaceful purposes only. The West, on the other hand, has long suspected Iran's uranium enrichment is meant for developing nuclear weapons. (Video via ODN)

We don't know for sure what held up the talks, but the timetable for lifting sanctions, as well as the scale of Iran's uranium enrichment program, likely had something to do with it.

Currently, Iran has about 19,000 centrifuges, more than half of which are in operation. They're used to fuel Iran's power plants but could also be used to develop a bomb.

International negotiators now have until June 30 to reach a comprehensive agreement, leaving the door open for defense hawks in Congress to push for more sanctions in the meantime. Those negotiators will resume talks in the next few weeks.