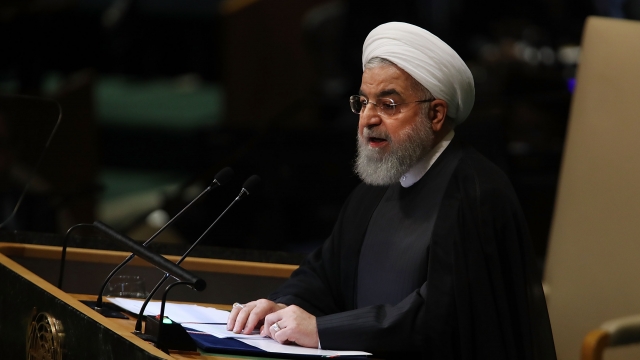 SMS
Iran Launches Satellite That Failed To Reach Orbit
By Katherine Biek
By Katherine Biek
January 15, 2019
It's one of two satellites that Iranian President Hassan Rouhani told reporters the country was going to launch "in the coming days."
SHOW TRANSCRIPT

A satellite that Iran launched early Tuesday did not successfully reach orbit.

According to Iran's Minister of Communications and Information Technology, the satellite did not reach the crucial speed necessary in the third stage of its launch.

It's one of two satellites that Iranian President Hassan Rouhani told reporters Monday the country was going to launch "in the coming days."

Tuesday's launch comes after U.S. Secretary of State Mike Pompeo warned Iran that its space plans would violate a U.N. Security Council resolution endorsing the Iran nuclear deal. It "calls upon" Iran not to undertake activities related to ballistic missiles that can deliver nuclear weapons, but it doesn't outright ban missile tests.

Pompeo said Iran's launch vehicles "incorporate technology that is virtually identical to that used in ballistic missiles." Iranian officials deny the accusations, saying the satellites are for telecommunications purposes.

But at least one other country agrees with the U.S.'s assessment. Israeli prime minister Benjamin Netanyahu claimed Tuesday that the satellite Iran launched is "the first stage of an intercontinental ballistic missile" it's developing.

As of Tuesday morning, the State Department had not commented on Iran's satellite launch. But it previously suggested such a move could lead to the U.S. imposing new sanctions on the country.