Iran Critics Compare Obama To The Man Who Appeased Hitler 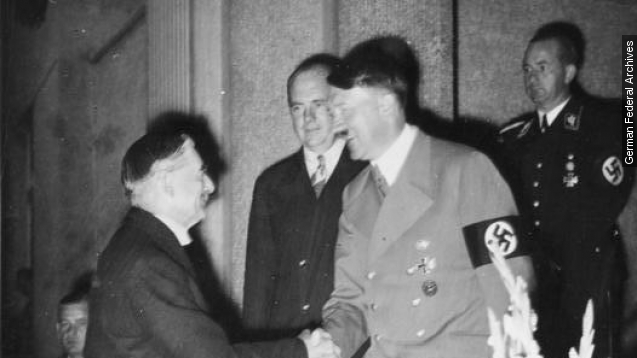 Critics of the Iranian nuclear deal have compared President Obama to former British Prime Minister Neville Chamberlain and his offer to Nazi Germany.

When British Prime Minister Neville Chamberlain signed the Munich Agreement with Adolf Hitler in 1938, he infamously declared the meeting brought "peace in our time." (Video via British Pathé)

That, of course, couldn't have been further from the truth.

Chamberlain's policy of appeasement on the eve of World War II handed Hitler a part of Czechoslovakia and opened the door for Germany to invade Poland. (Video via U.S. National Archives)

What it didn't do was allow the Nazis to covertly develop a nuclear arsenal in exchange for sanctions relief from the Allies. But you'd think so, given the comparisons.

"The nuclear deal being negotiated with Iran I believe will be a historic mistake on the same order and magnitude of Munich," Sen. Ted Cruz said in March.

No sooner had President Obama announced a deal with Iran Tuesday had his critics recycled their favorite analogy — Obama : Iran :: Chamberlain : Nazi Germany. (Video via The White House)

The comparison has been around for awhile.

"Some seem to believe that we should negotiate with the terrorists and radicals as if some ingenious argument will persuade them they have been wrong all along. We've heard this foolish delusion before as Nazi tanks crossed into Poland in 1939," President George W. Bush said in May 2008. (Video via NBC, British Pathé)

One big difference, some would argue, is Hitler got exactly what he wanted out of the Munich deal. The same can't be said of the Iranians. (Video via U.S. National Archives)

In exchange for sanctions relief, Iranians must reduce their number of centrifuges, stop enrichment at certain facilities and scale back uranium research and development.

So, at best, the comparison is a stretch. But it's one that's made just about every time a president negotiates with a hostile state.

When Ronald Reagan signed the INF treaty with the Soviet Union, conservatives took out full-page ads comparing him to Chamberlain. (Video The Ronald Reagan Presidential Library)

And Richard Nixon, too, faced his share of Chamberlain comparisons for reaching out to China. (Video via The Richard Nixon Presidential Library)

As for the current president, perhaps a more apt comparison is to Woodrow Wilson. Obama only has to look at Wilson's quest to join the League of Nations to know what a skeptical Congress is capable of. (Video via U.S. National Archives)

Congress now has 60 days to review the Iran deal before rejecting or approving it. (Video via Office of Prime Minister Benjamin Netanyahu)

This video includes images from the German Federal Archives and the U.S. Department of State.