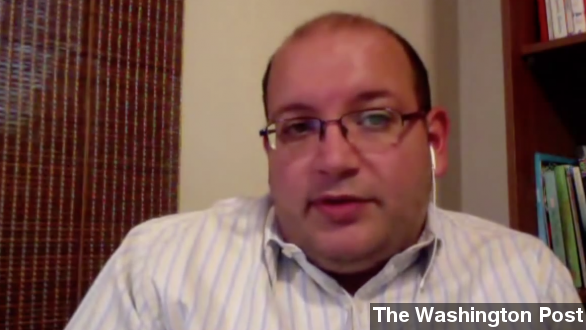 Jason Rezaian holds dual American and Iranian citizenship and has served as The Washington Post’s Tehran bureau chief since 2012. He was arrested by Iranian authorities in July without explanation.

Even after four months of pleas from the U.S. State Department, his family and his newspaper, Iran hasn't said what it's charged Rezaian with.

Though it isn’t hard to imagine it has something to do with his work for The Post, which was sharply critical of the Iranian government.

The country, after all, has a history of muzzling outspoken, Western journalists.

A contributor for The Wall Street Journal explains, “Iran’s Intelligence Ministry remains obsessed with proving that there is an American plot, involving journalists, academics, and intellectuals, to overthrow the Islamic Republic.”

The charges can be completely nonsensical. In 2009, an Iranian-American reporter was arrested for buying a bottle of wine. (Video via YouTube / Roxana Saberi)

In 2011, a freelance Iranian journalist received not only prison time, but 60 lashes for “creating public anxiety.” (Video via Committee to Protect Journalists)

Better known is the story of Maziar Bahari — the real life subject of Jon Stewart’s documentary “Rosewater.” The former Newsweek journalist was accused of spying for the West, and was detained by Iranian authorities for 118 days. (Video via "Rosewater / Open Road Films")

There was some hope that the situation for journalists would improve with the election of Hassan Rouhani, Iran's so-called moderate president. (Video via Press TV)

But hardliners have pushed back at attempts for reform. Press watchdog group Reporters Without Borders said 65 journalists and social media writers were in prison as of July.

Among them, Rezaian. And the latest developments, The Washington Post says, “appear to dash any hope that [he] could be freed in the near future.”