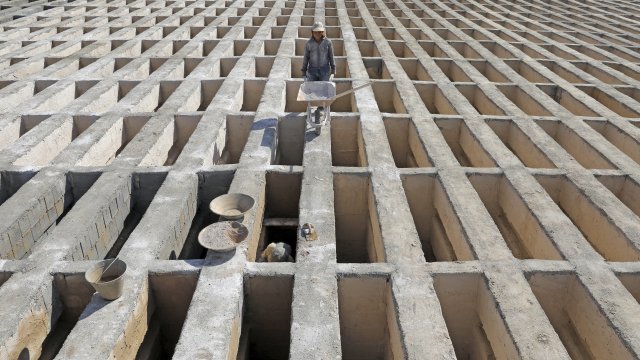 Daily infection rates have more than tripled since the start of October, with deaths peaking this month.

Iran has enacted a slew of new lockdown measures as the country battles its worst outbreak of the coronavirus to date.

Travel, shrines, schools and most businesses, shops and restaurants were shut down on Saturday in some of Iran's largest cities. The head of Tehran's chamber of commerce said this will close 70% of businesses in the capital city and surrounding areas. And residents can't travel between the affected cities, with even the use of personal cars banned after 9 p.m.

The new closures are set to last two weeks now, but they could be extended at any time. Iran's president said the government will provide four months of cash subsidies to 30 million residents because of the economic fallout from the latest virus surge.

The new rules come on the heels of two Iranian health officials' resignations, including the health minister's adviser and deputy. In his resignation letter, the deputy minister said the country's current COVID-19 surge is due to the ministry's mishandling of the pandemic.

Top Iranian officials downplayed the risks of the virus from the beginning. Now, the president is urging residents to help "lessen the death toll" after the country averaged more than 430 daily fatalities since Monday. The manager of a Tehran cemetery says its influx of bodies for burial has more than doubled since before the pandemic.

Daily infection rates have more than tripled in Iran since the start of October. Iran's highest single-day for new infections was November 13, and its worst single-day death toll was recorded three days later.