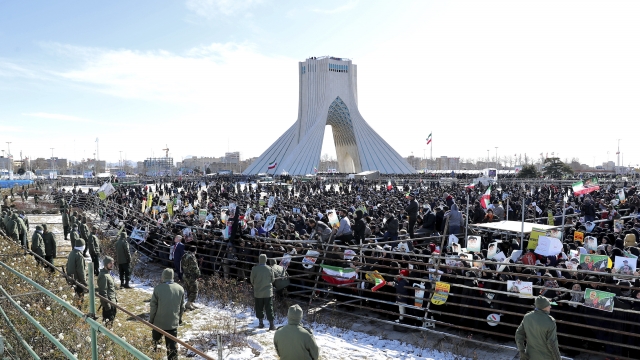 Iran is remembering its Islamic Revolution 41 years later. And President Hassan Rouhani took the anniversary as another opportunity to denounce the U.S.

The Associated Press reports hundreds of thousands of people turned out to celebrate the 1979 revolution in Tehran's Azadi Square. In his address to the crowd, Rouhani called on citizens to vote in the country's parliamentary elections. He also criticized the U.S. for the killing of Iranian Maj. Gen. Qasem Soleimani last month.

"The U.S. must know that they have made a blunder. ... Our commander was a guest of the Iraqi government. He was assassinated, and that is a major criminal action by the Americans, and that is in contravention of international law."

Iran's foreign minister, Javad Zarif, took to Twitter to send a message to President Trump, saying, "With all challenges & differences, in defending country & honor, all 82 million Iranians are ONE."