Iowans Caucus Away From Home For The First Time 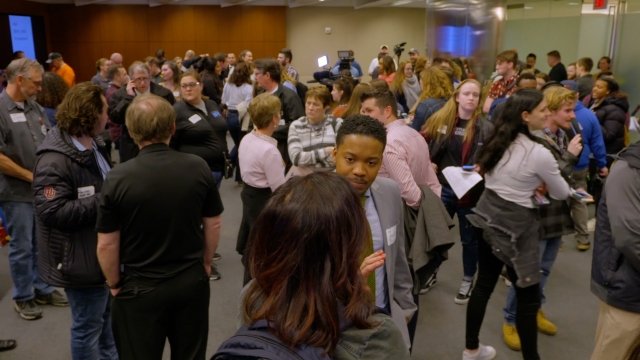 Iowans in and outside the state participated in so-called satellite caucuses for the first time in history.

Thousands of Iowans got the chance to caucus at so-called satellite caucus sites across the country and around the world.

The events were held at 87 sites with 60 locations in Iowa, 3 overseas and 24 locations around the US like this site here in Washington D.C. The Iowa Democratic Party added the caucus sites to get more people involved in the process.

"I think it's really, really cool," said Ellie Konfrst. "I was really nervous that I wouldn't get to caucus because I knew I would be here and I've always been really involved in Iowa politics and really integrated with all that. So I was really scared that I would have to sit out."

Around 100 people attended this caucus event. Many of them participating for the first time.

"This is the majority young people," said Ben Theuma, an Iowan and D.C. based college student. "I think it is important to get the youth out especially because it could be a lot of people's first caucus time. I think it's a really important thing because Iowa is really proud of that.  I know so many Iowans who are so proud to caucus [and] I'm really proud to caucus too."

Joshua Mauss, a student at Georgetown University, helped setup the D.C. satellite caucus. He and many others we spoke to hope that events like this take place during future elections.

"It's a major step for the Iowa caucuses," Mauss said. "I think it's the way [of] the future cause that is the main criticism [of] the Iowa caucus is very valid that is that they are much less accessible than a standard primary. [So] it's a great way for them to innovate ways to still maintain the caucus format but have it so it's accessible to more voters."