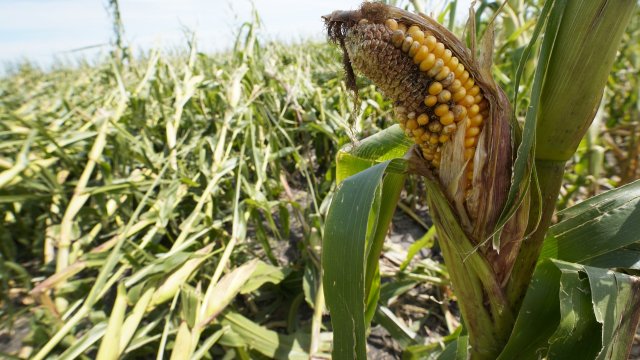 SMS
Iowa Derecho Is Most Devastating U.S. Storm Ever In Financial Cost
By Alex Arger
By Alex Arger
October 17, 2020
The National Oceanic and Atmospheric Administration estimated damages from the storm complex to be $7.5 billion from Iowa to Indiana.
SHOW TRANSCRIPT

No thunderstorm in history has caused as much damage in dollar cost as the August Iowa derecho.

The National Oceanic and Atmospheric Administration estimated damages from the storm complex to be $7.5 billion from Iowa to Indiana. That financial toll is higher than nine of this year's 10 record-setting hurricanes and tropical storms. Hurricane Laura is the only one to exceed it, causing an estimated $14 billion in damages.

A derecho - a fast-moving band of storms, often with hurricane-force winds - hit the nation's Corn Belt on August 10. It cut power to almost the entire city of Cedar Rapids, leaving hundreds of thousands without power for days or weeks. Most of the town's businesses and homes were damaged, and its wrath caused the deaths of four people.

The storm complex obliterated millions of acres of crops and thousands of trees. Just this month, the number of Iowa farms who are unable to harvest their crops after the storm has increased more than 50% since September.

Derechos carry winds at least 60 miles wide and 400 miles long, and the Iowa event brought 70 miles per hour winds for longer than an hour. The highest recorded gust of wind was clocked at 140 miles per hour, which is comparable to a strong tornado or hurricane peak.