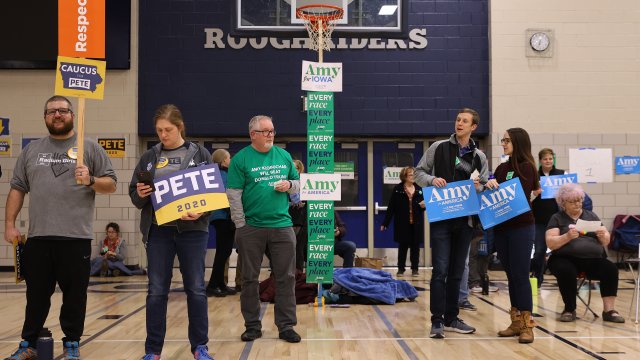 No one Democratic candidate left Iowa on caucus night with the momentum of a first place finish, so what impact could stalled results have on the candidates?

Look back no further than 2012, when Mitt Romney was declared the winner only for the Iowa Republican Party to say two weeks later that Rick Santorum had actually won. At that point, any buzz Santorum might've gained from a win in Iowa was long gone.

He never got the Iowa bounce. He got good exposure — he raised $1 million dollars that night — but had he been declared the winner, we thought he could have raised $3-5 million that night.

The episode has raised fresh questions about Iowa's "first in the nation" status.

I'd say if the Iowa caucus in 2012 was sort of a fat lip for Iowa, last night was a black eye.

Some Democrats have long criticized not only the state's complex caucus process but the fact that the first state to vote is overwhelmingly white and thus not representative of the country, let alone the Democratic Party, as a whole.

Candidates have invested significant money and time in Iowa because it's first — and it’s been that way for five decades.

But earlier this year, former Housing and Urban Development Secretary Julián Castro, while campaigning in Iowa, said that should change.

I know that the Iowa and New Hampshire folk have been very, very good at keeping their status so it's possible but I actually think when folks think deeper they're going to see that there's a better way to do this that is more reflective of the country and of the party.

Those campaigns who don't get that bump — maybe not so much Sanders because he has a lot of cash on hand to start with — but someone like a Sen. Klobuchar, it's going to force her to make some decisions.

Amid renewed calls to end Iowa's first in the nation status, Iowa Sens. Chuck Grassley and Joni Ernst — both Republicans — came together to defend their home state's caucus process.

They said, "We look forward to Iowa carrying on its bipartisan legacy of service in the presidential nominating process."